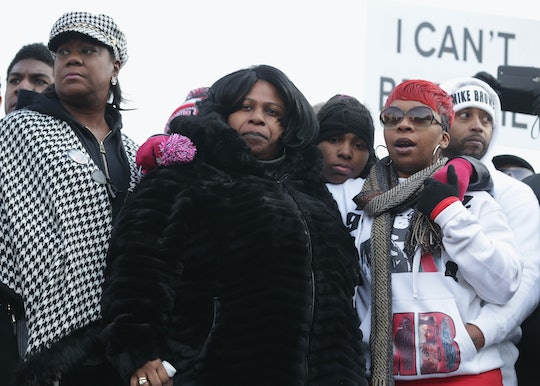 It was a verdict that many saw coming. After 12-year-old Tamir Rice was shot in November 2014 while carrying a toy gun, the two officers, Tim Loehmann and Frank Garmback, who were responsible will not face any charges. It's news that's hard enough for the Internet to swallow — the verdict came accompanied with many tweets protesting the move — but even harder for those closer to Rice. So it's easy to wonder how Tamir Rice's family responded to the grand jury verdict, which, according to The Washington Post, the boy's family saw coming.

Said the family in a statement via their attorney:

Today, more than a year after Cleveland police shot and killed 12-year-old Tamir Rice, a grand jury voted not to indict the shooter. Tamir's family is saddened and disappointed by this outcome — but not surprised.

Why's that? As the statement reads, Rice's family attorney accuses Cutyahoga County Prosecutor Timothy McGinty of "abusing and manipulating the grand jury process to orchestrate a vote against indictment" by hiring an expert to discuss the happenings of the video footage of Rice's death. (McGinty's office has not yet responded to Romper's request for comment.) As the statement reads:

It is unheard of, and highly improper, for a prosecutor to hire "experts" to try to exonerate the targets of a grand jury investigation. These are the sort of "experts" we would expect the officer's criminal defense attorneys to hire — not the prosecutor.

The statement continues on to claim that the prosecutor's "mishandling" of the case and "special treatment" of the officers "has compounded the grief of this family."

Speaking during a press conference, however, McGinty agreed that the grand jury's decision was not one to celebrate. As he said, "The outcome will not cheer anyone, nor should it." McGinty also told press that he had informed Tamir's mother, Samaria Rice, of the decision prior to it being released publicly. “It was a tough conversation … she was broken up," he told reporters.

And the justification for the verdict? McGinty, calling the incident a "perfect storm of human error," said footage showed Rice pulling a gun from his waist, which justified the police officers' action. According to the prosecutor, Loehmann and Garmback drawing and shooting their guns was "reasonable" as a "split second" decision, and toy manufacturers ought to redesign their toy guns to make them look more fake. But McGinty didn't face any also failed questions from reporters regarding the verdict following the conference.

Not everyone agrees with McGinty, though. Following the decision, Twitter exploded into comments from those absorbing the news, confused as to how any officer could get away with killing a 12-year-old, no matter how real his toy gun might have looked.

Still, Rice's family is hoping that protests to the decision happen, but with dissenters using their words over their fists. As their statement via their lawyer ended:

The Rice family is grateful for all the community support they have received and urges people who want to express their disappointment with how Prosecutor McGinty has handled this process to do so peacefully and democratically.

And, just as McGinty also mentioned that the civil courts could help Rice's family (the decision, he said, "doesn't mean the legal system is done"), the victim's family also expressed a desire that the case continue via the Justice Department, who they hope conducts "a real investigation into the tragic shooting of a 12-year-old child."

Based on the reaction, they're not the only one.