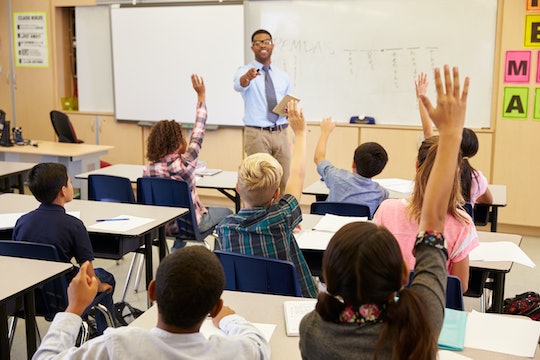 Standardized Tests Tell You *Nothing* About A Child's Actual Success, Teachers Say

Just last week, thousands of New York City school children had their entire week disrupted because of a glitch in the state's ELA testing system, which is run by an outside agency. The stress levels were high, kids were upset, and the schedule had to be changed at the last minute. Everyone was upset, from the administrators to the students, but the people who bore the brunt of this blunder were the teachers who had to work around the snafu all while preparing to proxy another exam. It makes you wonder what teachers really think about standardized testing, and just how impactful the results may or may not be.

A survey completed in 2014 found that nearly half of all teachers in the workforce right now had contemplated leaving the profession due in large part to the system of standardized tests now required in most public schools. They cited myriad reasons, but chief among them was that teachers were no longer teaching to educate for the sake of growth and the expansion of young minds. Teachers noted that they were now forced to "teach to the test," meaning that the focus shifted from the stages of development model of Piaget, long considered the gold standard in educational praxis, to a system of repetition and drills that don't serve children in the same way.

I am a voting member for my department of the graduate school I attend, and recently we had one of our major executive meetings. At this meeting, there was a long and heated debate about the use of the GRE and GRE subject exam for entrance to the school. All of us are educators in higher ed, and the majority of us have taken these tests — I know I have. The majority of the debate examined whether or not test scores were a good or better representation of student quality, or if we could determine that with grades, application letter, and references alone. In the end, it was agreed, and the motion carried that these tests do not provide a good assessment of the student, but instead showcased one specific talent, and more often than not, a level of privilege to access test prep. In the case of graduate school, the ability to take these tests multiple times, sending in only the best scores — not a phenomenon relegated only to the GRE, the SAT, High School, and Middle School entrance exams have been cited as unfairly benefiting those who can pay to prep as well.

Teachers spoke anonymously to the educational blog Bored Teachers, and vented their thoughts about the test, saying that there is an incredible amount of pressure on teachers and students surrounding these tests which weren't even given long term study before being implemented by the No Child Left Behind policy, enacted in 2002, which mandated that all schools must test their students in English Language Arts and Math on a routine basis.

Helen Spear, a third grade teacher in Georgia, tells Romper that the test simply isn't a great tool for understanding how a child is progressing. "Honestly, the test doesn't tell you what my students can do. It fails to show you that my student who won't pass has moved from a first to a third grade reading level with zero parental support." It is also only testing for one or two things. Spear adds that "it fails to show you that she is super artistic and can prove her knowledge of adaptations through a puppet show she has designed. It doesn't show how she has growth in math. It shows one data point over a five-day period."

To make matters worse, these tests paint every child with the same brush, making no allowances for how factors like socioeconomic, racial, immigration, and class status might affect the outcome for students, which then reflects poorly on teachers. Under this system, schools and teachers are penalized for "underperformance" of students, as well as being penalized if too many of their students decide to "opt out" of testing.

An interesting note that Spear points out is that the pressure on the testing comes from the administration. Teachers understand that assessments are necessary, but testing is probably not the best metric. Why not a portfolio of each student showing their progress, their skills? Spear says that "administration tell us that they know all of this and that the score is just a 'check point.' However, when the data comes in it changes because they get pressure from their bosses, who get pressure from others, who have completely forgotten (or never been!) in the classroom." It's not exactly balanced.

We cannot understate the cost of these tests, either. With state after state's teachers going out on strike (#RedForEd), it's clear that teachers are not paid enough, that they lack equipment and support, and that there is a general lack of access to those in power making decisions. In fact, one of the primary reasons listed for the Los Angeles teacher strike was the problem of high stakes testing, and the financial and emotional toll it takes on students and schools.

These tests, from elementary to PhD candidates, cost states and students nearly 2 billion per year, according to Education Week. That is a staggering amount of money when you think about the fact that the average teacher's salary is just under $40,000 per year, according to Niche, with many making much, much lower.

In my family, we have veteran teachers who work from kindergarten all the way through college, and not a one of us are fans of standardized testing. When it was put in place, it was designed to identify and eliminate under-performing schools, absent of an examination as to the deeper causes as to why these students were underperforming to begin with.

These tests cannot evaluate whether a student has eaten more than his government-provided breakfast, or whether he or she missed classes because they could not clean their clothes, or their parents were working so late that they slept through an alarm. The don't care if the child becomes so stressed about these tests that they make themselves physically ill the morning of the test. (As is the case with my son.) They cannot possibly take into account the special classes, tools, and extracurriculars that some schools have access to that others do not. The system is flawed, expensive, and in many cases, infuriating. Hopefully soon, we as a nation will begin to look more at the systems themselves than at the people just trying to survive within them.