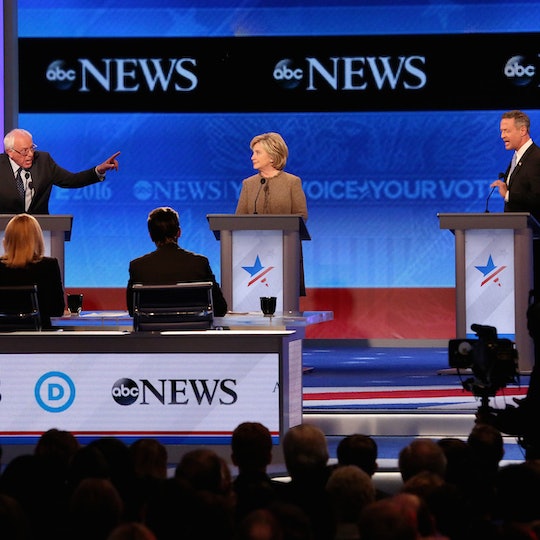 It's a topic they've touched on before but probably don't focus on enough. During the debate Saturday, moderators asked each candidate to weigh in on how they would improve police/civilian relationships. What the candidates said about #BlackLivesMatter at the Democratic primary debate hosted by ABC on Dec. 19, was only words, not action, but it shows that the movement is very much on their radar.

First to take on the question was Hillary Clinton. She began her remarks by saying that "we have systemic racism" in this country as well as in "our justice system." She added that without bipartisan commitment, there is no way to end systemic racism, but pleaded for government to "hear the voices of boys and girls in our community."

O'Malley followed, citing his term as Baltimore Mayor, where he took on the "painful issue of policing and race." His plan: ask for more transparency and accountability to end excessive force in policing. "There wasn't a single day when I wasn't asked if I kept my promise," he said. And while he said he reduced incarceration rates, "This is our time," he said, to end the racist and deadly police violence.

When Sanders took on the issue, he was perhaps the most cheered. "This whole issue concerns me," he began. "Let's be clear: Today in America we have more people in jail than any other country ... and they're predominantly African American." He then made a call to end institutional racism and a broken system.

The audience roared in support of Sanders' straight-talk. But not as loudly as they cheered when he proposed decriminalizing weed on the federal level. Woo hoo! Finally, Sanders closed with the idea that police departments need to look like the people they serve. His final remark,

Invest in jobs, not jails.

Twitter mostly approved of the amount of time and attention the debate spent on #blacklivesmatter.

In a week when the Freddie Gray trial ended in a mistrial, this was an important question to pose to presidential hopefuls. The candidates' answers all struck the same chord: In order to broker peace between police and communities they serve, our country must actively fight to end systemic racism.