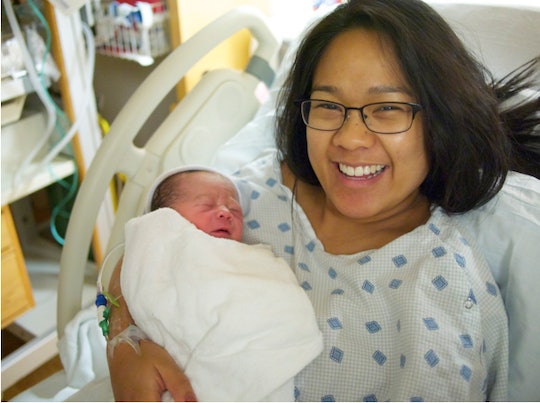 What The First 3 Months Home With Baby Are Really Like, Because Fair Warning — They Suck

If you’re pregnant with your first baby and eagerly awaiting your tiny human, first things first — congratulations! Although you might be dreaming of staring deeply into their precious face and watching their small chest rhythmically rise and fall as they sleep, you deserve to know that’s only a fraction of the truth. I’m going to tell you something you might not want to hear (because it's something I desperately wanted to hear): The first three months of parenthood suck. They suck. Having a newborn sucks out every ounce of energy, sleep, dignity, logic, sleep, time, sleep, and everything else you thought you had.

Don’t get me wrong; newborns are absolutely extraordinary. It’s difficult to deny their cuteness, with their tiny little limbs and soft coos. But babies change everything in your life. They leave no stone unturned, cancel every plan, and change your sleeping and eating habits for the rest of time. For me, the three months after delivering my firstborn felt like a profound miracle and a frightening disaster all bundled up in one sweaty, stinky swaddle.

And I wish like hell someone had told me about it.

My Body Hurt In The Most Sensitive Places

Babies have to come out somehow. Whether you birthed your baby vaginally or through a C-section, some part of you had to open up wider than normal, therefore the recovery process includes some inevitable soreness and perhaps even stitches that need to heal. I consider myself rather fortunate because it took me only 20 minutes to push out my baby, 10-40 minutes less than average for a first-timer, but I still ended up with a few tender sutures down there. I spent the whole week after giving birth sitting on ice packs and struggling through bowel movements (it literally felt like I was going to rip in half).

Breastfeeding was also one of the most painful physical transitions I’ve ever had to go through. Although breastfeeding was a beautiful bonding experience with many benefits I’m happy I got to enjoy, those first two weeks of learning how to nurse accentuated just how sensitive nipples are. When I first started out, latching felt like someone was torching my nipples. (Luckily, there are creams that help alleviate the soreness.) When I wasn’t struggling with that pain, my body was still trying to figure out the necessary rate of milk production. My breasts swelled up like water balloons and would projectile-spray milk if they were accidentally poked. It felt like I was carrying a sack of hot coals in each breast, and the only way to relieve the discomfort was to go through the burning sensation of latching to rid of the excess milk. It takes a while to get into the groove of breastfeeding, but the first few weeks can be brutal.

What Is Sleep? Asking For Myself Because I Legitimately Don't Know Anymore

The first three months of caring for a newborn mark the first time you and your partner will get familiar with true exhaustion. Though school and work are also capable of robbing your sleep, at least you can hibernate after you finish finals, or, even better, are getting paid. A newborn with an erratic sleep schedule, though? It means sleep is never on your side. It’s an elusive fantasy you chase day after day, night after night, year after year. You’re simply not allowed to sleep as long as that baby is awake. Sorry.

Every evening, as soon as our heads hit the pillow, our daughter would scream and demand that we get up and tend to her needs. She nursed every two hours around the clock — and every single hour if she was feeling particularly voracious. More often than not, nursing or changing alone wouldn’t soothe our daughter, and lullabies were too calm to hold her attention. We’d end up blasting Michael Jackson’s Greatest Hits album on repeat and dancing to every single song just so she wouldn’t cry. It didn’t matter if it was 2 p.m. or 2 a.m. — babies that young don’t have any concept of time. As glad as I am that our newborn had great taste in music, it was impossible to sleep through Jackson’s “Thriller” while performing the whole dance with a baby in arms.

Speaking of crying, babies cry. You can expect the obvious cries — for hunger, crankiness, fear, irritation, a dirty diaper, an overly frilly outfit — but then there are the not-so-obvious shrieks — if you leave the room, if you put her down before she’s ready for that, if she’s really happy, if it’s Sunday night and you have to go back to work on Monday, if you sing the wrong song when trying to get her to feast on solids for the first time.

Before I had my daughter, I thought I’d just live through the crying and casually respond to her whimpers by changing her, feeding her, or simply putting her to sleep. I had no clue what I was thinking, because soothing a baby is far more difficult than anyone will admit. Babies cry, it’s normal, but what I didn’t anticipate is how horrifyingly blood-curdling my baby’s cries could be. She screamed in pitches I didn’t know my ears could register. Sometimes she held her breath for an extra few seconds, enough for her tiny body to turn a deep-blue color and scare me to death. There were days when she would cry for hours in the middle of the night, and despite all my efforts at soothing her, she’d wail until the sun rose, then wail some more. Some days, after hours of crying with no end in sight, I’d helplessly set her down and succumb to tears of my own.

I don’t know how I managed to stay sane — or if I even did — through the sleepless nights of indefinite screaming.

As Baby Grew, So Did My Relationship

Babies will change your relationship with your partner. Having a baby was a crash course in the art of direct communication with my significant other. We had to learn how to be kind yet straightforward when it came to our expectations from one another. For a while I fostered a hidden resentment that crept up when I was exhausted from lack of sleep. I didn’t know why I resented my partner, but I just did. There were times I caught myself glaring angrily at him as he was peacefully sleeping while I had to stay wide awake, painfully nursing our child every two hours.

As much as he urged me to ask him when I needed help, I still insisted on changing an extra diaper, only to turn around and complain about how I did everything. I could chalk up my actions to postpartum hormonal imbalance, but they left my partner feeling upset and hopeless, which wasn’t nice on my part. We weren’t exactly our polite selves while caring for a screaming newborn on three hours of sleep, and we admittedly said and did hurtful things in those tender moments, but our relationship was forced to grow -- fast -- in order to keep us all together and happy.

I learned to be honest with my needs despite my prideful attempts at trying to be a supermom and do it all (which, let’s be honest, no). He learned to respond with gentleness and step in for an extra diaper change or bathtime when he saw I was at my wit’s end. We exposed our most vulnerable sides to each other, and by doing so, fought less and started to enjoy being parents together more.

When you’re not changing diapers, feeding, and attempting with all your might to steal a minute of sleep for yourself, you’ll find yourself suddenly questioning the meaning of life. In the brief moments I managed to spend alone in my early days of motherhood, I found myself pondering if I could ever be something other than a mom again. With a newborn, it felt like my only role in life was to breastfeed and soothe around the clock, and suddenly whoever I was before motherhood ceased to exist. My new purpose in life, or lack thereof, got me feeling anxious and overwhelmed. It caused me to shut down in anger, sadness, or a gloomy mix of both, and not speak for hours. Eventually, my hormones balanced themselves out and I learned to manage my emotions better, but some days in early motherhood were intensely dark.

I realize in retrospect that it was entirely OK to feel this way. Everything was rapidly changing — and it’ll only continue at that pace as my child grows — and it’s impossible to not worry about who I was or who I am. Slowly but surely I settled into the idea that I could be a Mother And… even if I didn’t always know exactly what would (or could!) come after the “and”.

I Wish Someone Had Warned Me

Perhaps people (like your mother and aunts) don’t discuss why those first three months suck so bad out of fear you might decide not to have children at all. If you haven’t already experienced early motherhood, then I repeat: those first three months after having a baby are freaking miserable. You will be in considerable pain in your most sensitive body parts. You will not sleep. You will fight with your partner, your dog, your mailman, or whoever is around. You will question your purpose in life and the meaning of it all. Just remember this: all that pain and struggle is completely normal — expected, even.

Oftentimes, too many to count, I felt like I couldn’t handle taking care of a newborn any longer. Then my daughter giggled for the first time, and that hopelessness died a little. She started to roll over and demonstrate a little independence, and I was instantly filled with wonder. She began to grab at our faces, and she actually became fun. Then it hit me — I’m raising a human being who will one day be as big as me. Those painful and overwhelming first months are temporary. Going through the emotionally draining and sleep-deprived newborn stage made me feel like an entirely new and improved person. Knowing that I can trudge through the most difficult days and still find rays of joy gave me a sense of motherly confidence I’m not sure I could’ve ever found in another experience.