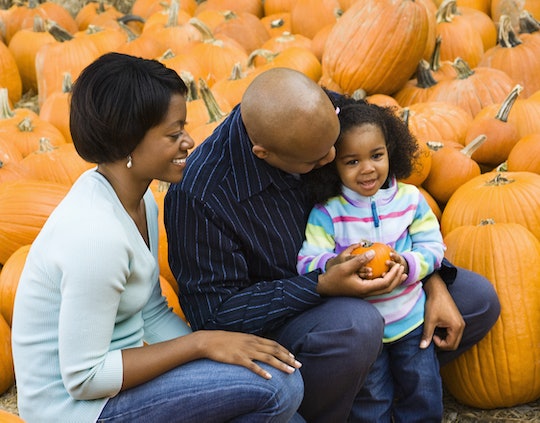 This Author Spoke To 1,000 Parents & Here's What She Found Out About Happiness

The closest thing we have to a parenting oracle is KJ Dell’Antonia, who doesn’t consider herself a parenting expert, even though, as a mother of four, she spent the past decade writing about every facet of child rearing as the former editor of The New York Times Motherlode blog. “I’m just a curious journalist who had a problem and wanted to solve it,” she says. Her problem? Life as a working mom sucked a lot of the time, and she didn’t want to feel that way anymore. “I wanted to write a book about making things better.”

The result is How to Be a Happier Parent: Raising a Family, Having Life, and Loving (Almost) Every Minute, a new guide to savoring everyday family moments more and freaking out less about tantrums, homework, back talk, and all the other soul-sucking aspects of parenting. Blending the latest research with real-life tips for negotiating flash points like screen time and sibling rivalry, How to Be A Happier Parent offers plenty of potential solutions to common parenting problems, but ultimately, it’s a book about making a deeper mental shift away from anxiety and fear.

Dell’Antonia surveyed over one thousand parents to understand why some reported feeling happier than others, and discovered that attitude matters more than circumstance.

“Happier parents want to be happy,” she says.

Dell’Antonia found that happier caregivers make decisions that work for the adults in the family, as well as the meeting the needs of the kids. They allow their parenting to evolve over time, demonstrating greater hands-on involvement in the early years, and nudging their offspring toward increasing independence as they grow. Perhaps most importantly, happier parents find a way to keep problems in perspective, recognizing that a lot of the stuff that makes parenting hard in the moment isn’t life-threatening. They offer support when their children are struggling, without getting caught up in the kids’ uncomfortable emotion themselves.

Parents who value and maintain their own happiness also set their kids up to be happier, the author says. “When we jump on our kid’s emotional rollercoaster, we put the burden of our happiness on them. It’s important for them that we be okay. We need to be the rock.”

Know When To Freak Out

Staying calm as a parent sounds like common sense; actually maintaining that level of zen while your child is crying about too much pepperoni on her pizza is something else. To bridge the gap between hope and reality, Dell’Antonia offers ten mantras for happier parents and illustrates how they apply to different parenting situations throughout the book. One of the most powerful mantras she shares comes from Buddhism: There is nothing wrong.

The author admits that concept may be a hard sell for some readers. “People want to yell, ‘Yes, there is so something wrong!’”

Dell’Antonia doesn’t deny that all parents will face a true crisis at some point. “What if you have a child who’s struggling with alcoholism?” people ask.

“If you do, then you need a different book. The point is, most of us don’t [have a child with an addiction], and yet, we spend a lot of time worrying about what we’re going to do when that terrible thing happens. [We tell ourselves] ‘If I worry, I keep it from happening.’ That doesn’t work.” Happier parents deal with problems when they arise but not before. Learning to take that approach has helped her get her own parental anxiety under control.

Understanding what works for your family, whether or not is works for anyone else, is another key to happiness. Recognizing your own strengths as a parent is helpful too. Dell’Antonia sums up that idea with the mantra: You do you.

“Everybody gets something pretty right,” she says. “There is something you do that other people don’t do, you just don’t recognize it. You maybe bake cookies every afternoon with your kids, or you play the guitar at night before you go to bed. Or you have a tractor and you taught the kids to drive it at 8. There is something you do that is uniquely your family.” The flipside of that is accepting that no parent can do it all. “Nobody is doing everything. Gwyneth is not doing everything. Nobody is.”

Find The Things You Love About It

According to Dell’Antonia, ultimately happiness comes from what we pay attention to, and happier parents tend to notice what’s working and Soak Up the Good (another mantra.) Of course there are biological, societal, and cultural factors that make parenting harder, like the way that babies don’t let you sleep, daycare costs too much, and the fact that global warming is real. Parents can work to change the things that can be changed, the author says, but it’s good to recognize these issues won’t be resolved in the short term and to try to find a way to be happier anyway.

“This is a big chunk of our lives. It’s worth it to look for the things that will make you love this time,” she says. “You don’t have to love all of it, but you know, here we are, doing it.”

Researching and writing the book has made Dell’Antonia a more capable, happier parent, but she doesn’t want anyone to think she’s got everything under control.

“Do I sometimes clear my kids dishes when they leave them instead of making them come back and do it? Absolutely, even though I say we shouldn’t. A big part of why I’m happier is that I stopped with the catastrophizing. You just say, ‘What would make me happier about the situation? And if the answer is nothing, then I might as well just deal.”

She jokes about a potential for a credibility gap between her public life as an author and her everyday existence as a small-town hockey mom.

“I’m afraid that the people that actually see me on a day-to-day basis will [say], ‘You don’t look very happy right now,’” Dell’Antonia said. “In my head I’m like, ‘Happier! I said happier. I didn’t say happy.”

How to Be a Happier Parent: Raising a Family, Having Life, and Loving (Almost) Every Minute by K.J. Dell'Antonia is out now from Avery.