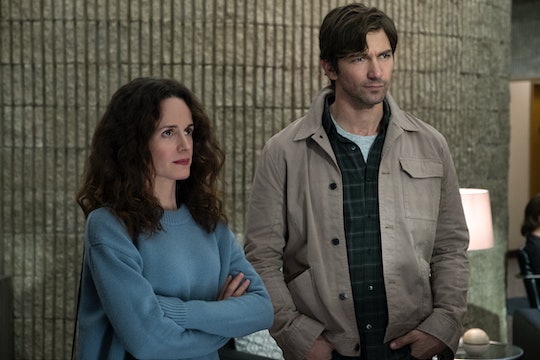 Of all my childhood memories, some of the most vivid include the feeling of blind terror I experienced when I believed (and I mean truly believed) that there was a monster under my bed who wanted to kill me. Netflix's new series The Haunting of Hill House asks the question: what would become of children if those monsters turned out to be quite real? In an interview with Romper, the stars of the series explained why The Haunting of Hill House is more than a ghost story — and what they want you to take away from it. I'll admit that the series scared the bejeezus out of me, but in a distinctly pleasant way.

The show, inspired by the Shirley Jackson novel of the same name, jumps back and forth in time to find out exactly what happened to the five Crain children that one spooky summer they spent living at Hill House. But it also investigates how those kids have learned to deal with the trauma they experienced as they grew up. The short answer is: some a bit better than others. But nobody made it out of the house unscathed. For example Luke Crain, the youngest of the Crain children, grows up to rely on heroin as a way to cope with his PTSD.

Oliver Jackson-Cohen, who plays the character, explains that following the characters into adulthood and looking at their various coping mechanisms makes the horror more "human," by not relying on a supernatural event. "It's what's left in our minds," he says. "It's our memories that can be the scariest."

Not all of the Crain children grew up self-medicating with drugs, however. The oldest, Steve (Michael Huisman), turns his family's experience into a novel — his way of making the best of their childhood. Shirley (Elizabeth Reaser) becomes an embalmer and owns a funeral home with her husband. This is how she learns to "fix" it. Reaser describes Shirley's general attitude as: "Don't f*ck around. Get your sh*it together." And where Reaser herself says that she likes to see the truth of things, Shirley really doesn't want to see it. "She just wants to have her nice life with her husband and her dead bodies and her children." Unfortunately for Shirl, that's not the way this story goes.

After the siblings' youngest sister Nell dies of apparent suicide, the Crain siblings, along with their father, reunite as adults for the first time in one of the most compelling and technically marvelous episodes of television I've seen in a long time. Episode 6 is a bottle episode, all shot in just a couple of marathon 30-minute takes. "It was intense," Reaser says. "We rehearsed it and shot it like it was a play." Huisman adds, "And even the way they had modified our stage. Because a lot of it plays in the funeral home at Shirley’s but also we go back into time in a flashback and we’re back in Hill House." He specifically mentions one transition in which the siblings' father, played by Timothy Hutton, is searching for the bathroom when he finds himself back at Hill House 20 odd years previous. It turns out production actually modified the stage so that Hutton walked from the funeral home directly into the house without a cut.

Watching the episode from the viewer's perspective, it is positively bone-chilling. Despite taking place mostly within a the sterile confines of a funeral home viewing, it has all the tension and claustrophobic creep-factor that haunted house movies are known for. It made me want to weep, hide under the covers, and also call my sister to apologize for every petty and passive-aggressive thing I've ever said to her.

If I'm being completely honest, all ten episodes made me want to call my siblings — and very grateful that none of my childhood monsters ever turned out to be real. That I know of, that is.

The Haunting of Hill House is now streaming on Netflix.