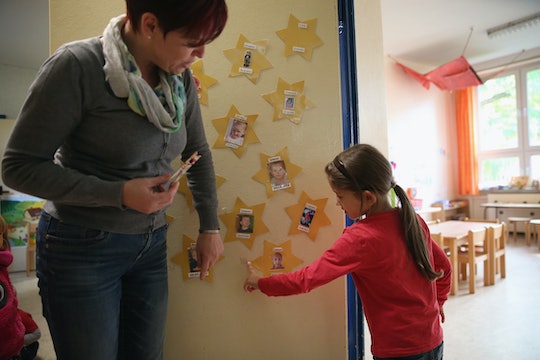 What The New Education Bill Means For Parents

House Bill 610 was recently introduced to the House of Representatives by Representative Steve King of Iowa, and you might have heard some rumblings from educators about it. That's because the bill establishes an education voucher program and seeks to repeal a portion of the Elementary and Secondary Education Act of 1965 that involves nutritional standards in schools. Both of these things are very worrying to many teachers and others in education. With the bill now referred to the House Committee on Education and the Workforce, it will likely be further discussed as it advances in the coming days, leaving many families to ask what the new education bill, HR 610, will mean for parents.

On the surface, the bill may not seem like a bad thing. Among other things, it's summarized on Congress.gov as a bill that regards the following:

To be eligible to receive a block grant, a state must: (1) comply with education voucher program requirements, and (2) make it lawful for parents of an eligible child to elect to enroll their child in any public or private elementary or secondary school in the state or to home-school their child.

Sounds great, right? But when you look more closely, this could be a big problem for parents, families, and students.

As activist and organizer DeRay Mckesson tweeted, "HR 610 has been introduced, which would fundamentally change public education if passed." School choice sounds like a great idea, but it's one that Education Secretary Betsy DeVos has been criticized for championing. DeVos promoted school voucher programs in Michigan, her home state, and often the regulations regarding that sort of "school choice" actually lead to public school money being redirected to private or religious schools — which could leave public education with less to work with for foundational programs and services, according to the San Diego Union-Tribune.

Simply put, the bill in question would take federal funds budgeted for education and create a voucher program for parents to decide whether they want to send their child to private school, or even home school them, instead of having them stay in the public school system. Opponents of the bill and voucher programs make the argument that when public schools that are struggling lose students as a result of such programs, they lose critical funding, and that in turn makes it more difficult for those public schools to improve.

Twitter user @evefox urged followers on Twitter to, "Say no to privatizing our public education system! Urge your Rep to reject HR 610," and directed people to share her message. This is just one example of one of the fears people have about HR 610: that it will essentially privatize education as we know it in this country.

Parents who care about public education, and access to good public education for their children as well as all students, should be concerned about HR 610. Taking away funding from public schools that are already struggling and have limited options to make up the shortfall is a step backwards in improving education.

And what of the other provision in HR 610? One is summarized as, "The bill repeals a specified rule that established certain nutrition standards for the national school lunch and breakfast programs." That rule being repealed requires schools to improve the availability of fruits, vegetables, whole grains, and low-fat or fat free milk in school meals. It also requires a reduction in the levels of sodium, saturated fat, and trans fat in school meals.

The food students receive from school breakfasts and lunches should be of concern to any parent. A possible repeal of nutritional standards like the ones above should alarm parents who want nutritional options for their kids. According to the School Nutrition Association, "Nearly 100,000 schools/institutions serve school lunches to 30.5 million students each day, including 19.8 million free lunches." Many students partake in school lunch, and, for many low-income children, they rely on it. So parents should be concerned that HR 610 seeks to reduce the nutritional standards that have to be followed when serving those lunches.

The bill was introduced in January and is currently being considered by the House Committee on Education and the Workforce. If you are a parent concerned with the bill, contact your representatives about it now.