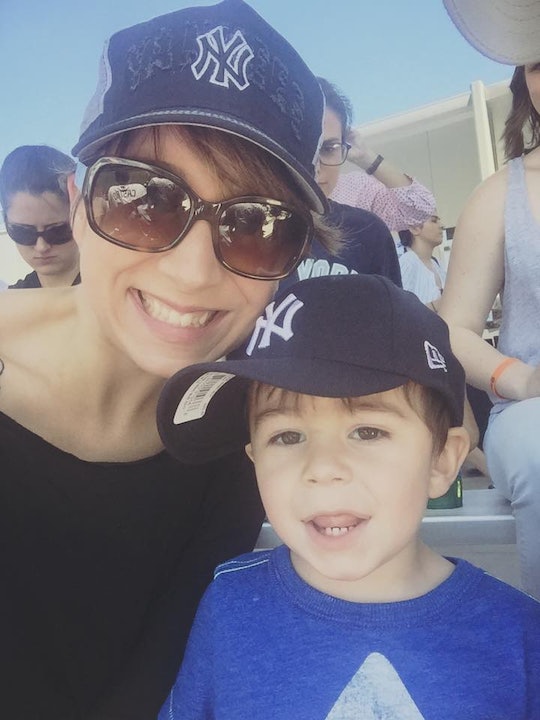 What The SCOTUS Abortion Ruling Means To Me, A Mom Who's Had An Abortion

As a mother who's had an abortion, I was flooded with fears as I anxiously awaited the Supreme Court's decision on Whole Women's Health v. Hellerstedt, arguably one of the most important rulings on reproductive rights since Roe v. Wade. I worried the Supreme Court of the United States would uphold the restrictive abortion laws that have forced women to travel thousands of miles to the few remaining reproductive clinics available in Texas. I was afraid Targeted Regulation of Abortion Providers (TRAP) laws, which single out the medical practices of doctors who provide abortions and impose difficult requirements on their medical practices, would become the norm, like they have in Indiana, Arizona, Louisiana, and Oklahoma.

I was afraid that those unnecessary regulations would continue to force women to put their own lives at risk, as already over 100,000 women in Texas have been forced to self-abort their unwanted pregnancies. I was afraid that my friends, countless women across the country, and even my son would continue to live in a world where women have to fight for the basic, fundamental right to make their own medical decisions regarding their own bodies. I was afraid that, as a mother who's had an abortion, this case would set a dangerous precedent for my children's future, one that would force women to become mothers before they were ready, able, willing.

But after the Supreme Court's ruling, that all changed.

The SCOTUS ruling makes me proud to be a mother who's had an abortion.

The Supreme Court struck down some of this country's most anti-abortion measures Monday, June 24, ensuring that countless women, previously stifled by unnecessary regulations, can now procure a legal and safe and common medical procedure regardless of where they live or what their financial situation may be. After I heard the news, I sat at my desk, unable to focus, internally screaming with joy and pride and, honestly, disbelief. Accessibility to abortion providers, like the kind I had in the state of Washington, should be the abortion any woman in any state has if she so chooses — and now hopefully it will be. I know that, in my own experience, it was a privilege to not have to travel thousands of miles or sit through a mandatory 72-hour waiting period or undergo mandatory counseling — and now, hopefully, many women will have access to those same privileges.

I've shared my abortion experience on stage in front of 800 people and I've written countless pro-choice articles and I've proudly proclaimed that I am a mother because I chose to be, not because I was forced to be. And the SCOTUS ruling makes me proud to be a mother who's had an abortion. It reaffirms that I've done nothing wrong, that I'm not "damaged goods," that I'm not someone who should be ostracized from society. The ruling reminds us all that the 28 states requiring mandatory waiting periods and the 11 states requiring women to make two clinic visits prior to obtaining an abortion are, in fact, unconstitutional rules. The ruling is a chorus of hope for every woman, every girl, and everyone who seeks body autonomy and the right to choose, a reminder that though the government and our politicians have failed us, the highest court in the land sided with us, not against us. They stood up for women's rights.

In the moment immediately after I read SCOTUS' ruling, I thought about my son, and the unapologetically pro-choice environment I'm raising him in. I was already planning to tell my son I had an abortion before I gave birth to him, was already planning on telling him why I chose to have an abortion, and now I'll tell him that our government ruled in favor of my right to make that decision for myself. He'll know that he exists because I was ready and willing and able to become a mother, and he'll understand he was a choice, not a consequence I was forced to endure. I'm raising my son to understand that becoming a mother is an overwhelming, important, and life-changing choice no woman should ever be forced into making, and now he'll be raised knowing his government supports this logic. That, for once, the government stands with his mom, not against her. Most importantly, one day, if my son and his partner are faced with an unwanted pregnancy for whatever reason, they'll know that no matter what they decide they're ready for, they'll have choices. They'll have a say.

As a mother, if I become pregnant and realize another child would be detrimental to myself and my family for whatever reason, I could have another safe and affordable abortion.

I thought about my own abortion, which was as mundane as they come. I was in an unhealthy relationship and was unable, unwilling, and unprepared to become a mother. I scheduled my abortion at a local Planned Parenthood in Bellingham, Washington, no more than a few blocks away from my home. I walked into the clinic sans angry protestors, was treated with dignity and respect, was given the highest level of care, squeezed my then-boyfriend's hand when the cramping became intense, and then later walked out, relieved I was no longer pregnant. I smile, thinking that perhaps the ease in which I was able to make a medical decision about my own body will become the norm, not a luxury.

I thought about a dear friend of mine, who was living in a Louisiana at the time of her abortion. She was forced to travel hundreds of miles and pay for a hotel room and, because the clinic was far away and no one was willing or able to go with her, had to travel alone to her abortion. We were two women who both had abortions, but only one of us was made to financially (and emotionally) suffer in order to obtain one. With the privilege that came with living in a liberal state supporting women's reproductive health came the acute and unavoidable knowledge that so many women do not. I didn't have to suffer through three days of waiting and I didn't have to spend a ridiculous amount of money, all because I lived in a different state. We were two women seeking abortions in the same country, but we might as well have been in completely different continents. I use that guilt as a reminder that my own children cannot and should not be made to suffer as so many women already have. And in light of the Supreme Court's decision on Monday, though I know this is just the first step, I still felt the pressure of that guilt slowly unravel.

I thought about what this ruling means to women like me, the 61 percent of women who are mothers who terminate their pregnancies. I thought of how impactful it is to hear your government remind you that just because you've had one child doesn't mean you have to have every child. I thought of the lives lost before Roe v. Wade and after Roe v. Wade, of how many children were left without a mother all because getting an abortion was either illegal or inaccessible. I thought about how lucky I am to be living in a time when abortion is not only legal, but a constitutional right the Supreme Court is dedicated to upholding. I thought about the fact that, as a mother, if I become pregnant and realize another child would be detrimental to myself and my family for whatever reason, I could have another safe and affordable abortion.

I thought about the daughter I may or may not have one day. My partner and I are trying to have another baby, and I am constantly (and sometimes not-so-silently) hoping that baby is a girl. As I observe the world around me and the society she'll inevitably inherit — one which upholds rape culture more often than not, spreads messages celebrating unrealistic beauty expectations, and shames women for making their own reproductive decisions — I know, after Monday's decision, that she might not be forced to endure the stigmas so many women have. I know that, because of rulings like the one the Supreme Court made, she'll have greater opportunities to make her own medical decisions for her body, perhaps even devoid of the guilt and shame our country still attaches to a procedure one in three women will have in their lifetimes.

Maybe, just maybe, she won't have to sit at her desk on a Monday morning, afraid, like I was, over the outcome of SCOTUS' decision on a woman's right to choose, because she already knows, when it comes to reproduction, her government respects her right to her body. Maybe the idea that women can make their own medical decisions and have full autonomy over their bodies won't be a concept worth celebrating to her because it'll already be a right she thoroughly enjoys. Maybe, like me, she'll end up having an abortion and, later on, end up having a baby when she's ready. And she'll know, just as my son will, that there's no shame in that.