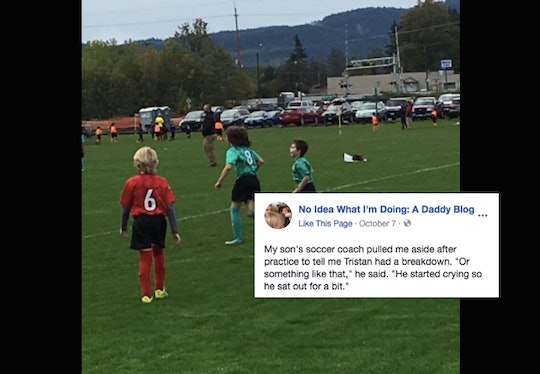 No Idea What I'm Doing: A Daddy Blog/Facebook

Parents face choices every day when it comes to how to raise their kids, what boundaries to set, how to discipline them, when to give in to their demands, and so much more. Very few moms and dads document their decision-making processes online for all to see, but parenting writer extraordinaire Clint Edwards sure does. And the way this dad responded when his son was pulled from soccer practice for crying helps to fight toxic masculinity in the best way. It all started when Edwards, who keeps the parenting blog "No Idea What I'm Doing: A Daddy Blog," found out that his son had burst into tears during soccer practice.

As Edwards wrote in an Friday blog post, his son Tristan's soccer coach told him recently that the boy had "sat out for a bit" after he started crying during practice. Edwards' instinct was to tell Tristan to "toughen up" and "stop this BS and play the game like a man." Instead, he ultimately went with the more thoughtful approach that's sure to get you on the fast track to a child's heart: ice cream.

Well, they did get ice cream together after the practice, but there was also a catch. Tristan would have to tell his dad exactly what happened, and listen to his dad's advice.

So, over $1 cones at McDonald's, Tristan told Edwards how he had struggled through a drill, felt as though his teammates were better soccer players than he was, and confided that he wanted to quit the sport altogether. But, as Edwards wrote in the post, he himself had quit sports after his own coaches had given him the "toughen up" spiel, so Edwards went a different route.

Here's what he ended up telling Tristan instead:

It's life advice that transcends soccer, that's for sure. And it strikes me as much more effective than shaming a child for experiencing a real emotion related to a feeling of inadequacy in front of his coach and teammates.

And it worked! At least, it seems as though Edwards was able to communicate his point to Tristan. Because, by the end of the talk, Tristan had changed his mind about wanting to quit soccer. "I'm going to keep trying," he told his dad, according to the blog post.

Too often, boys are encouraged to stamp out their emotions, to be stoic, to be rough. That's simply not healthy, as all kids (and adults, too) need to recognize and express their emotions in order to adequately deal with them. So, kudos to Edwards for fighting back against the hypermasculine tropes that sports all too often enforce.

As Edwards wrote in the "About" section of his blog, he often feels as though he doesn't know what he's doing as a dad because his own dad was not around when he was growing up. Instead, his father was incarcerated on and off from the time Edwards was 9 years old until he died when Edwards was 19. "I still don't have someone to turn to when it comes to fatherly questions, so I'm making this up as I go," Edwards wrote.

Parenting can be scary and confusing for all parents. Constantly second- guessing yourself is an occupational hazard. But, despite Edwards' claims that he's bumping around in the dark, it definitely seems as though he's doing a pretty good job. Which makes it that much better that he's sharing the process with other parents just trying to figure it all out, too.