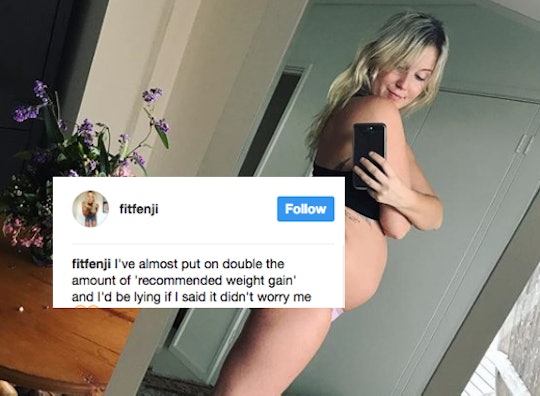 Pregnancy precipitates a massive change. For most women, it means they're about to become a mom to a whole other human being for the very first time or add another member to their family. But it's not just what's about to come that can mean huge differences to the way things were for expecting and first-time moms. The physical changes can be pretty intense — and difficult for some women to accept and cope with. Yes, it seems daunting, but overcoming the stress and discomfort of it can start with a perhaps not-so-simple shift in mindset. That's how Australian fitness Instagrammer Fenella Scarlett McCall fought pregnancy body image fears, and it's pretty incredible.

Before she announced to all her followers that she was pregnant at just nine weeks back in July, McCall generally used Instagram to document her health and fitness lifestyle. There were the requisite gym selfies and mouth-watering snaps of her always-aesthetically-pleasing meals bursting with so many nutrients that you could pretty much get a vitamin boost just by looking at them. Many of those pre-pregnancy captions tout self-love, but the message became especially poignant when the Melbourne fitness buff started documenting her pregnancy.

In her initial announcement July 26, McCall wrote that she was "scared, nervous, anxious, happy, and so much more" — and her honesty transported followers on her journey with her.

Soon after the announcement, McCall shared that the way her body was changing had definitely proven hard for her to deal with with at times:

Since putting on weight I've cried and felt 'yuck', I've been angry and I've been sad. I've compared myself to others, thinking 'what's wrong with me, why can't I just get it together 😒🍫😒🍩.'

At the end of August, McCall wrote that she'd been struggling with her the way her body looks now and that "[s]ymptoms and [her] changing body left [her] completely floored." But her mindset had started to evolve, even though — as she'd chronicle in a later post — intense cravings for carbs rocked her normal diet and lethargy rendered her mostly inactive:

Then finally, I've had a shift 🌪💃 I have started to get energy back. Started to accept my growing stretch marks and dimples around my thighs. Starting to feel a bit pregnant and not just fat and full 🤰🙄.. I wish I was one of those women who just take to pregnancy like 'it ain't no thang 💁' BUT- that just ain't me.. I'm a sensitive insecure being and it takes WORK to learn to love myself

In fact, experts often say that realizing there's only so much pregnant women can do to control their changing bodies can be a major stepping stone to overcoming pregnancy body image fears. "Women need to develop a willingness to view bodily changes as part of the journey of motherhood, instead of something to be feared," psychotherapist Julie Hanks told Parents Magazine.

As McCall now knows, relinquishing control can be one of the most liberating things that a woman can do for herself. In an Oct. 23 post, she wrote:

Embracing the rolls, cellulite and weight gain of pregnancy ☺️🙏 Shifting my attention to feeling positive, with goals of health and happiness, instead of 'least weight gain and stay as toned as possible'

McCall's self-love journey is a breath of fresh air for women who may be having similar body hangups or difficulties coping with all that comes with pregnancy, physically. As she shared her highs and lows, she showed other women who might be struggling that it's normal for them to feel unsure of themselves, but that their wellbeing and that of their babies is so much more important that maintaining their pre-baby figures or a number on the scale.