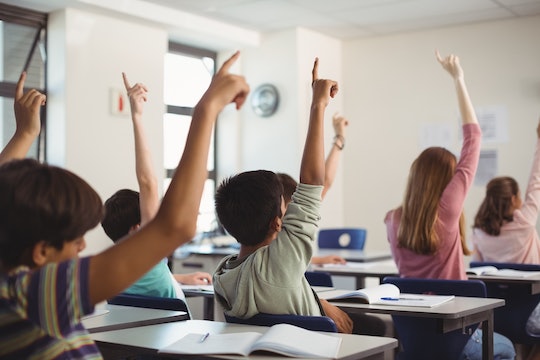 If you were appalled by the idea of arming teachers with guns, wait until you learn about an even worse plan. What Pennsylvania's Millcreek Township School District gave teachers to fight off school shooters is completely nonsensical, and not just because armed combat is not part of a teacher's job description. The argument could be made that a handgun could potentially take down an assailant, given the right circumstances (again, I am not advocating for that at all), but the same can't be said for a 16-inch long souvenir baseball bat.

Yes, that's right, Millcreek Township spent $1,800 of taxpayer money to give every teacher and support staff member in the district — about 500 people total — miniature bats. "We don't want to be sitting ducks," Superintendent William Hall said on Wednesday, according to The New York Times. "We're not just going to go hide." The idea that there's something wrong with hiding from an attacker carrying an assault rifle meant for use in an actual war is bad enough, but are teachers actually expected to take one down with a glorified ruler? Hall believes it's possible. "I think a bat could disarm a pistol with a nice swing," he said. MTSD has not responded to Romper's request for comment.

"It is the last resort," Hall conceded, according to Erie News Now, "But it is an option and something we want people to be aware of." He also said the bats, which will be locked up in each classroom, are primarily meant to be symbolic, which adds a whole new level of absurdity to the story. If they're meant to remind teachers to fight back against a shooter, shouldn't they be in plain sight? Or if they are actually supposed to use them, are they expected to fumble with keys when the school goes on lockdown? And if all the district wanted was a symbol, couldn't they have just sent out a memo to hang on the wall, rather than blowing nearly two grand on tiny sporting equipment?

Believe it or not, this isn't the first school district in Pennsylvania to arm teachers with unconventional weapons. For the past two years, Blue Mountain School District has stocked every classroom with a bucket of rocks to defend against school shooters, according to The Philadelphia Inquirer. Superintendent David Helsel said of the idea: "If an armed intruder attempts to gain entrance into any of our classrooms, they will face a classroom full of students armed with rocks, and they will be stoned," he told The Inquirer:

At one time, I just had the idea of river stone. They’re the right size for hands, you can throw them very hard, and they will create or cause pain, which can distract.

BMSD has not responded to Romper's request for comment.

School shootings are a real concern for Pennsylvania. The gun ownership rate there is 27.1 percent, CBS News reported. And according to the Center for American Progress, nearly 14,000 people were killed with guns in Pennsylvania between 2005 and 2014, or "more than two-and-a-half times the number of soldiers killed in combat in the Iraq and Afghanistan wars combined." More Pennsylvanians are killed by guns every year than by car accidents, the Center also reported.

Pennsylvania does not require background checks from unlicensed dealers, nor does it require gun owners to report lost or stolen guns, regulate ammunition sales, or require any licensing or registration for gun owners, according to the Giffords Law Center to Prevent Gun Violence. The state also does not allow courts to prevent dangerous people from having access to guns, other than domestic abusers, and it allows open carrying without a license. Pennsylvania has had 10 school shootings in the past five years, according to Everytown for Gun Safety. The state needs a solution — every state does — and a tiny bat or a bucket of rocks isn't going to cut it.