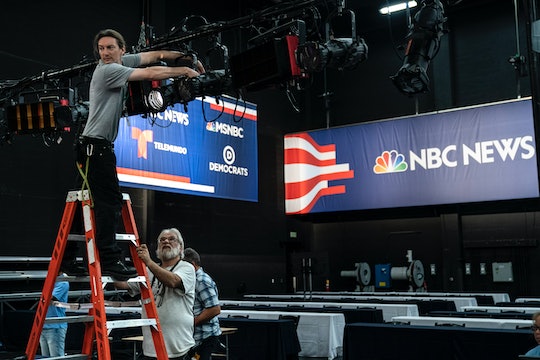 The 2020 presidential election is around the corner and many people are eager anxious to see who will be racing against President Donald Trump and where they stand on important issues. And for those who want to stay informed and are wondering what time the first 2020 Democratic debates are this week, here's everything you need to know because they're coming up soon.

More Like This
The Obamas’ New Family Rule? Get Vaccinated If You Want To Hang Out With Us
Biden Proposes Plan To Give Every Child Free “High-Quality” Preschool
A Private School In Miami Says It Won't Employ Vaccinated Teachers
Everything You Need To Know About The Rugrats Reboot

The first Democratic debates will be held in Miami, Florida, on June 26 and June 27, aka this Wednesday and Thursday, according to CBS News. As for the timing, the debates will begin at 9 p.m. EST and end at 11 p.m. EST.

To watch them on TV, you can tune into NBC, MSNBC, or Telemundo. If you would like to stream them online, you can visit NBCNews.com, the NBC News app, Telemundo, NBC News' Facebook, Twitter and YouTube pages as well.

The debates will introduce voters to nearly all of the current Democratic candidates, which is long, to say the least. According to CBS News, the candidates debating later this week include:

If you're thinking that there are a lot of potential candidates this year, you're correct. There were 20 who qualified for the first debate, which Bloomberg reported is a historic high — in fact, the exact word used was "staggering."

Of course, it speaks to the momentum to get a new POTUS into office, which seems to be at an all-time high this year. Be that as it is, the process of actually getting to the debate stage is a bit more difficult than most would imagine. As The Daily Beast reported, to even get to the first stage in Miami this week, candidates had to fulfill the following requirements:

Due to the fact that there are so many candidates this year, the debates are broken down into two nights, during which the Democrats are split into two groups. As such, 10 candidates were chosen to appear each night, which is more conducive to ensuring that all parties are able to respond to questions.

Though nobody knows prior to the debate which questions will be asked or topics will be raised, it's fair to assume that they might cover some of the more hot-button issues, such as Warren and Sanders' plans for student debt relief, the ongoing crisis at the Mexican-American border, as well as women's issues, including reproductive rights and social justice, as CNBC reported Biden might touch on.

All in all, it will certainly be an interesting two nights, and quite literally set the stage for the presidential election that will unfold over the course of the next five months.