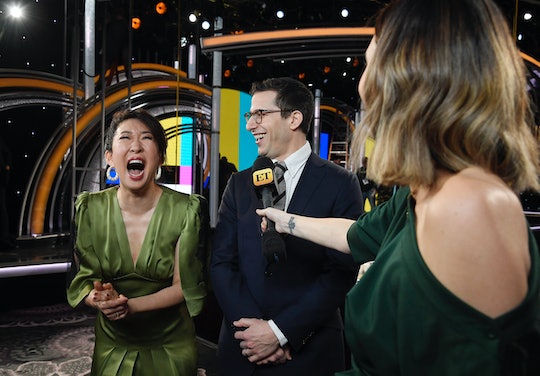 Here's When The 2019 Golden Globes Will Air, Because The Show Is Going To Rock

Don't let Christmas and New Year's Eve distract you — America is still in the midst of awards season, people. And the first major award show of 2019 is already here: the Golden Globes! If you're planning to watch the ceremony live, you'd probably like to know: What time are the 2019 Golden Globes on?

If you have a TV, the Golden Globes will be pretty easy to watch this year. The ceremony, which is in its 76th year, will air live on NBC. If you were hoping to stream the show, you have a few options. For those with a cable provider login, the Golden Globes will be available for live streaming on NBC.com or on the NBC app. If you don't have a cable login, you're not out of luck: NBC's Facebook page is expected to air a live stream of the broadcast as well, NBC News noted.

In early December, NBC announced that Sandra Oh and Andy Samberg would be hosting the Golden Globes. The two actors presented at the Emmys together last year, and they drew attention for their great comedic chemistry. "Sandra Oh and Andy Samberg, the comedic duo we didn't know we needed﻿," someone commented on a YouTube video of the clip. "My favorite part is that ANDY is being the serious one here," read another comment.

And the duo seems excited to be hosting the show, even though they only had five days to plan their act, which is not going to mention politics, as they told The Hollywood Reporter in a recent profile. "It's going to be great. I think people are ready and could use a little smile," Samberg told the publication. "Everyone is depressed, and maybe that's as good a reason as any that everyone could use a little time to laugh and celebrate."

Oh agreed with her co-host, explaining why she personally doesn't want to get political on Sunday. "I don't really think that [getting political] is for the hosts necessarily," she told The Hollywood Reporter. "You make it an open and safe place for whoever wants to use that platform to speak."

So clear your Sunday night plans, because the Golden Globes are all you'll need.