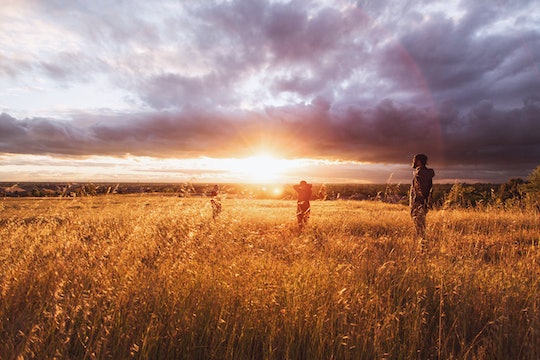 What Time Do The Clocks Change When Daylight Saving Time Ends On Nov. 6?

It's that time of year again. Summer has ended, and fall is now in full swing, so that means daylight saving time (DST) will be ending soon – Sunday, Nov. 6 to be exact. For the people out there that are concerned about whether they'll be losing or gaining sleep, figuring out that they're gaining a precious hour of shut-eye is likely a wonderful thing. But what time exactly do the clocks change when DST ends on Nov. 6? It might happen when you're already sleeping, unless you're the night-owl sort.

According to Live Science, the clocks push back one hour at 2 a.m. on Nov. 6. So on that Sunday, the clocks will read 1 a.m. instead of 2 a.m., and people will gain an "extra" hour in the day. And while many people celebrate the idea of theoretically getting more sleep (I mean seriously, what's better than catching a few extra zzzs) research has shown that our bodies may not actually register that we're getting the extra sleep we think we're getting when the clocks "fall back."

A research article published in Harvard Health Publications for Harvard University's medical school, cited research by Dr. Yvonne Harrison, a senior lecturer at the University of England, who explained why gaining an hour may only pertain to a small number of people.

In the Fall, only a minority of people actually get that promised extra hour of sleep. During the following week, many people wake up earlier, have more trouble falling asleep, and are more likely to wake up during the night. People who tend to be so-called short sleepers, logging under 7.5 hours a night, and early risers (also known as larks), have the most trouble adjusting to the new schedule.

The idea that many of us don't gain more sleep is definitely a letdown, but that's not the only concerning news surrounding DST. Some research has connected DST, (mostly to the effects associated with DST "springing forward" in March, causing the clocks to go forward an hour) to a number of negative effects like workplace injuries, car crashes, headaches, and heart attacks.

A Vox report in March cited a 1999 Johns Hopkins University study that aimed to uncover the effects of sleep disruptions and car accidents. Apparently, the researchers found a small increase in road deaths after the clocks sprung forward in the spring, Vox reported. "We didn’t expect to see anything, actually," Richard P. Allen, a Johns Hopkins neurologist who oversaw the study told Vox. "To me it was really amazing that one hour made that difference."

Clearly, DST is something that continues to be researched and analyzed — and rightfully so — despite all the buzz about the extra few winks. Either way, prepare to adjust to the change in seasons accordingly.