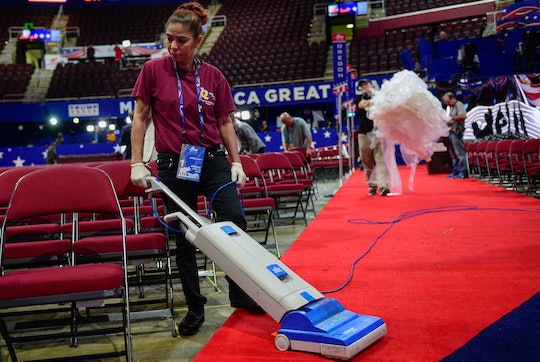 What Time Do The Speakers Start At The RNC? It Kicks Off On Monday

After months of preparation, anxiety, and predictions, the Republican National Convention officially begins on Monday night. If everything goes according to plan, presumptive Republican nominee Donald Trump will finally become the official presidential candidate of the GOP. Though the RNC is not open to the public, the hundreds of reporters on the ground will provide minute-by-minute updates, live streams, and commentary. That said, what time do the speakers start at the RNC?

Every day of the four-day affair is a little different. Tonight's theme is "Make America Safe Again," and according to Vox, it is scheduled to begin at 7:50 p.m. Eastern Time. Melania Trump, Iowa Sen. Joni Ernst, Army Gen. Michael Flynn, and more are slated to speak on Trump's behalf.

On Tuesday, the convention gets an earlier start. It is scheduled to begin at 5:30 p.m. Eastern Time, according to NPR. While the theme is "Make America Work Again," the main event is the roll-call nominating process, whereby the delegates will pledge their votes to a candidate. The speakers on Tuesday will include Tiffany Trump, Donald Trump Jr., former presidential candidate Ben Carson, and Kimberlin Brown.

Wednesday's proceedings will begin at 7 p.m. Eastern Time and the theme is the slightly cryptic "Make America First Again." Vice President of the Eric Trump Foundation Lynne Patton, Trump Vice Presidential pick Mike Pence, and former House Speaker Newt Gingrich are all scheduled to take the stage. On Thursday, the event's final day, speakers will not begin until 7:30 p.m. Eastern Time. They include Peter Thiel, the founder of Paypal, Ivanka Trump, and Trump himself, according to Vox.

The speaking schedule is largely dominated by members of the Trump family, but there will be a good number of other politicians, celebrities, and pundits in attendance to show their support for the candidate. Perhaps surprisingly, former presidential rivals Texas Sen. Ted Cruz, former Arkansas Gov. Mike Huckabee, New Jersey Gov. Chris Christie, and Wisconsin Gov. Scott Walker are all going to be there. Neither John Kasich, governor of the hosting state, nor Sarah Palin will be speaking — but most likely for different reasons. Kasich remains a staunch critic of Trump, while Palin remains herself. Other critics who have chosen to eschew endorsement and even attendance of the RNC include Republican Mitt Romney and Arizona Sen. John McCain, according to The New York Times.

According to NBC News, over the course of the convention 2,470 delegates, 2,302 alternate delegates, thousands of media professionals, and many, many Republicans will take over downtown Cleveland, Ohio, and their proceedings will take over the nation's airwaves.

Besides its coverage on every major news outlet, the GOP has made another attempt to appeal to the younger demographic by releasing a mobile app called RNC 2016. It allows users to follow along with all the hubbub of this year's convention.

More Like This
What You Need To Know Before Talking To Your Kids About Gun Violence
These Baby Boy Names That Start With "B" Are The Best
'Call The Midwife' Has A Fascinating True Story Behind It
New Parents Google Around 6 Baby Questions A Day, New Survey Says