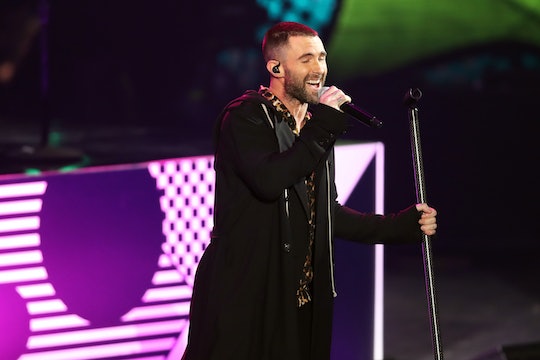 On Feb. 3, the Los Angeles Rams and the New England Patriots take to the Mercedes-Benz Stadium in Atlanta, GA for the 2019 Super Bowl. Maroon 5 is playing the halftime show along with a few confirmed (and some surprise) guests. But viewers tuning in for the music and the commercials more than the actual, you know, football may be wondering what time Maroon 5 performs. Well it turns out that Super Bowl LIII's halftime show doesn't have a scheduled start-time because it depends on the pace of the game. However an educated guess can be made.

Official kickoff time for Super Bowl LIII is 6:30 p.m. ET, but viewers can expect the game to start closer to 7 p.m. Between the national anthem and the rest of the pomp and circumstance preceding the game — expect a distinguished Atlanta native guest or two à la George Bush performing the game-opening coin toss in 2017 — the actual football won't start right away. According to Sporting News, this means that viewers can expect the halftime show around 8:30-9 p.m., depending on how quickly the game progresses. This places Maroon 5's performance right in the middle of primetime, which is exactly where they want to be.

Confirmed to accompany Maroon 5 at halftime are guest stars Travis Scott and Big Boi, a Georgia native better known as one-half of hip hop duo Outkast. While there's been speculation that Cardi B. will join Maroon 5 as a surprise guest, considering she's a featured artist on their hit single "Girls Like You," Cardi told TMZ back in February of 2018 that she refused to be a halftime show performer in solidarity with Colin Kaepernick. The former San Francisco 49ers quarterback sparked controversy in 2016 by refusing to stand during the national anthem played before games in protest of police violence against black lives. Following that season, he found himself unsigned and eventually Kaepernick filed a grievance against the NFL and its owners alleging that they had unofficially blacklisted him to keep him from playing in the 2017 season.

Several artists have reportedly turned down playing the Super Bowl halftime show in support of Kaepernick, according to Billboard, including Rihanna. And Maroon 5, Travis Scott, and Big Boi are all fielding a fair amount of criticism for agreeing to play.

In fact, the NFL has canceled the customary pre-game press conference with its halftime show performers this year, opting instead to show reporters a video package with behind the scenes footage of halftime show rehearsals. It's widely believed that the NFL canceled the press conference in order for the performers to avoid thorny questions about Kaepernick and the NFL.

Other artists in contention as possible surprise guests include Christina Aguilera, featured on Maroon 5's "Moves Like Jagger," which, of course, also sets the stage for a Mick Jagger guest appearance (The Rolling Stones played the Super Bowl halftime show back in 2006). But Atlanta is a huge music city, so there are plenty of hometown heroes who could take the stage by surprise. Music fans will just have to stay tuned.