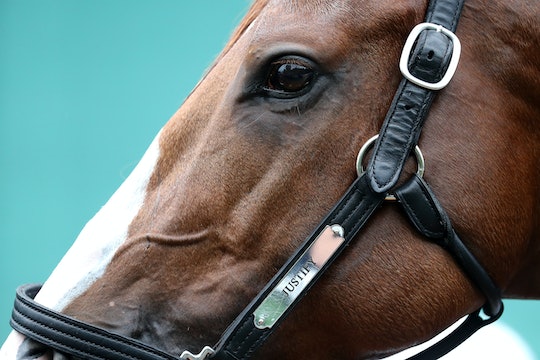 The Kentucky Derby Happens Fast, So Here's What Time The Action Will Happen

The Triple Crown of horse racing kicks off soon with the 145th Run for the Roses. While there’s a whole weekend of festivities surrounding the event, there is one race that everyone tunes in to see. So, what time does the 2019 Kentucky Derby start and how long should you plan to watch it?

Horse racing is unlike any other sport — except maybe track and field — in that it happens fast. There’s no need to set aside an entire afternoon to sit down and watch, unless you’re interested in the entire slate of races that happen throughout the day.

But the Derby, the race for 3-year-old horses is one of the last races of the day on Saturday, May 4, and this year it is scheduled to get under way at 6:50 p.m. EST, according to the race’s website. The entire run takes just a couple of minutes, which is why it’s often called the most exciting two minutes in sports.

NBC will be hosting coverage of all the day’s festivities starting at 2:30 p.m. EST, according to NBC Sports, and its website will also be carrying streaming coverage of the race.

The Derby is part of the three-race series known as the Triple Crown. Together with the Preakness and Belmont Stakes, every year about 20 thoroughbreds strive to become one of the few legendary Triple Crown winners.

Last year’s Derby winner, named Justify, did go on to win the Triple Crown. He became just the 13th horse in history to do so since the it first happened in 1919, according to the Paulick Report. Justify won the races in legendary manner, the outlet reported, since he was a horse that had not been raced at all during his second year, unlike most other competitors. He was undefeated when he was retired due to a chronic ankle injury, according to the Los Angeles Times.

The fun news about Derby day is that you don’t have to know about horse racing at all to enjoy it. Like the Super Bowl, just showing up to socialize can be half the fun, and you might even pick up a thing or two, like how to make a mint julep, the signature drink of the day.

In Louisville, where they race is held, Derby day parties are a big deal, with attendees decked out in funky hats, similar to those worn by people attending the race live. In fact, entertaining expert David Burtka told Real Simple that insisting that guests wear a proper Derby look sets the tone for any party. That includes sundresses, linen, and bowties. And stock up lots of good bourbon, Burtka recommends, to make all those yummy mint juleps.

Even if you’re watching at home alone, though, it’s worth it to tune in for a few minutes around 6:30 p.m. EST to watch the jockeys mount up and the horses enter the chutes. Then it’s just moments until they are off, and history is being made once again. For two minutes, it's well worth the time to experience this unique and exciting piece of American sports.