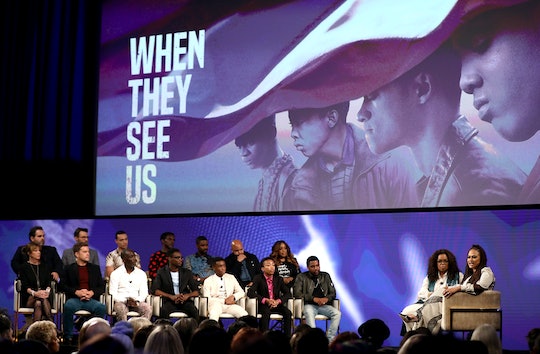 Netflix’s new series, When They See Us, highlights the injustice faced by the Central Park Five — a group of black and Latino men who were wrongfully convicted of raping and assaulting Trisha Meili in 1989. After serving years in jail, the men were exonerated on all charges in 2002, and now they’re sitting down with Oprah Winfrey to talk about their experiences. If you want to hear their compelling stories firsthand, you should know what time the When They See Us Oprah special airs.

The special is called Oprah Winfrey Presents: When They See Us Now, and according to The Oprah Magazine, it will air on Wednesday, Jun. 12 at 10 p.m. ET on OWN and Netflix. In the special, Oprah will sit down with the actual Central Park Five — Antron McCray, Kevin Richardson, Yusef Salaam, Raymond Santana and Korey Wise — and talk to them about their ordeals. Oprah will also talk to the cast and crew of the Netflix series, including director, Ava DuVernay.

When They See Us depicts the circumstances involved in the group’s initial 1989 arrest, and their subsequent trials, convictions, years spent in prison, release, and their eventual exoneration. But along with exposing the racial injustice they suffered at the hands of police, prosecutors, and the public, the series also focuses on the emotional pain and trauma they and their families faced.

In an interview with Variety, DuVernay revealed that the five men had always wanted to talk to Oprah about their experiences, and now that they’re getting that chance, they’re extremely happy. “I’m excited about it because they’re excited about it,” she told the outlet. “At one point, one of them had said to me a couple of years ago during the research period, that when they were young, they’d wished that they could just get to Oprah. [They thought] if they could get to Oprah and tell their story, maybe then people can hear their side because they knew how powerful she was, how much people listen to her. And it didn’t happen at the time they were incarcerated, they were guilty, people threw them away, and now it is their time. And so the fact that they get to sit down with her and finally tell her — her specifically– their story is so emotional to me, so moving.”

One of the Central Park Five, Yusef Salaam, told Variety that the public vilification they witnessed after their arrest felt like and end to their story, but this interview with Oprah feels like a new beginning. “Korey said once that they put a bounty on our heads by taking out these full-page ads calling for our deaths, and in many ways, this is life after death,” said Salaam. “And for Oprah to be here, to be whispering our names — I mean, of course she’s shouting it — but to be whispering our names, it is just magnificent.”

In a clip from the special, you can see how Oprah’s insightful voice structures a progressive and productive discussion about racial injustice. The series is eye-opening on its own, but it will be even more compelling to hear the Central Park Five tell their stories themselves, so tune into OWN or Netflix on Jun. 12 at 10 p.m. to watch.