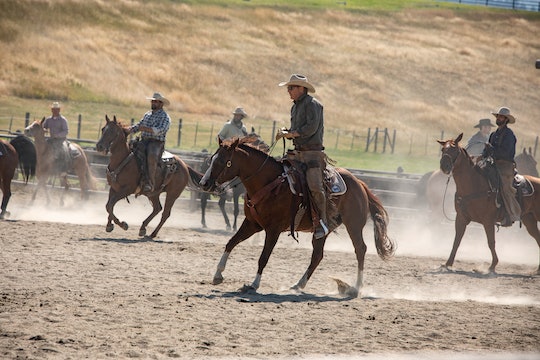 The country's favorite western back is on Paramount Network and new episodes begin June 19. So, you're probably wondering what time does Yellowstone Season 2 air. There's not too much longer to wait for new episodes but you have to be a bit of a night owl to watch the show on first run because it airs at 10 p.m. ET on Wednesday nights.

This totally makes sense, as murdering your brother-in-law isn't exactly family-friendly content. The slot doesn't deter any viewers. Yellowstone is not only Paramount Network's biggest hit, it's also the "most-watched new cable series of 2018" with a total of about 5.1 million viewers per episode in the first season. These days, that's formidable with network ratings so color me impressed.

Of course, family drama is totally relatable to most people — Yellowstone's just happens to be set on a ranch and follow a man's fight to keep his land. Yellowstone Ranch is the largest continual ranch in the U.S. so if they lose it the Dutton family falls from a metaphorical throne. Viewers clearly understand protagonist John's (Kevin Costner) motivation. As Costner says at the show's Season 2 premiere, "This is a fifth generation family so you want to preserve the legacy of the land." He went on, "It's pretty obvious what [John] wants. He wants things to continue the way they always have."

Of course, if he got his wish there would be no show. There are new villains in town this season and the stakes are higher than ever. "Our problems are worse than they were in the first season," confirmed Costner in a video interview on the show's set. That's not surprising, but what does it mean, exactly?

Well, there's a new family in town and the Beck brothers mean business. They are "wealthy business moguls" who own a casino in town and they want what the Duttons have. "Season one you had these three forces coming at each other fighting for the same thing, said Luke Grimes in the same teaser video from the set. He plays John's youngest son Kayce. "And the Beck brothers come along now and threaten all three of them."

As for what to expect from the characters, Neal McDonough, who plays Beck brother Malcolm, tried to give viewers a taste of what to expect. But he can't say much or he would spoil the adventures. "It was so much fun to jump into those boots of Malcom Beck," he explained in the teaser. "When I asked Taylor Sheridan [creator] who Malcolm Beck is, he goes, 'You're gonna do some dark stuff.'" When McDonough pressed to find out what that meant he was advised to take it at face value.

Apparently there are no words to describe Malcolm's actions all season. You just have to watch them to believe them, or in McDonough's case live them, to believe them. He loves the wild (and corrupt) decisions his character makes, and is happy to get that material. "For an actor, [challenging material] is what you really want, and I'm having an awesome time on the show."

It sounds like if you enjoy family drama that involves characters spiraling father and farther into corruption, you're going to love Season 2 of Yellowstone as much as the cast does.