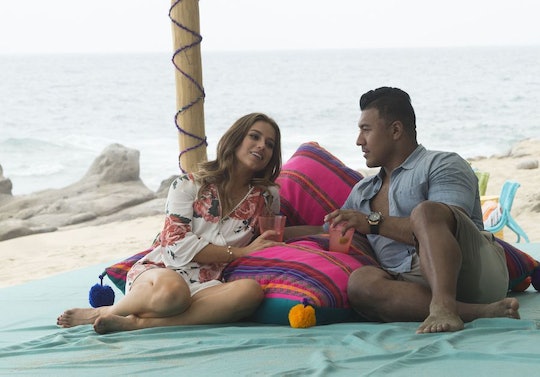 If you live in New York, you may come home from work on Monday ready to crack open a bottle of wine and watch your favorite form of television cotton candy, Bachelor in Paradise. You may then be surprised to find that instead of sexy singles going on dates on the beach, you're watching preseason football. So what the heck is going on and what time is Bachelor in Paradise Episode 3 on in New York? The latest installment will be airing later in the evening on Monday night. Much later in the evening.

Bachelor in Paradise usually airs at 8 p.m. ET on Monday and Tuesday evenings on ABC. However, today, New York channels will be airing the New York Giants vs. the Cleveland Browns which, as a reality TV junkie, means literally nothing to me. This is like biting into what you assume is a brownie and getting meatloaf instead. There's nothing necessarily wrong with meatloaf, it's just not my thing and I was expecting chocolate and sugar, making the whole experience disappointing and a little disturbing. Not to worry though, folks. You can still catch Bachelor in Paradise on Monday night, you'll just have to stay awake for a while. I hope you don't have anything important to do early in the morning, though. Here are some shots of my face at hearing this football news, especially when I learn what time this thing is actually on...

The football game will air until 11 p.m. ET, and will then be followed by the usual local evening news. Then Jimmy Kimmel will come on for an hour, and then Nightline. Finally, Bachelor in Paradise will debut at the very reasonable hour of 1:07 a.m. ET. It's like ABC doesn't even want people to watch it. Is this just a particularly bad episode? Are we going to have another highly uncomfortable and potentially problematic discussion about race and consent? If you're curious, you have to wait until the literal middle of the night to find out if you happen to live in New York City.

I have to be honest, I'm a little annoyed by this football coverage. It's not even football season. This is preseason. I'll put up with football on Thanksgiving or the Super Bowl, or maybe even an average Sunday in the winter as long as there are snacks and beer involved with friends. But I do not appreciate having my summer guilty pleasures interrupted by preseason football. Why couldn't the football game happen at 1 in the morning? I would like ABC to know that the Bachelor in Paradise devotees in New York are extremely put out.