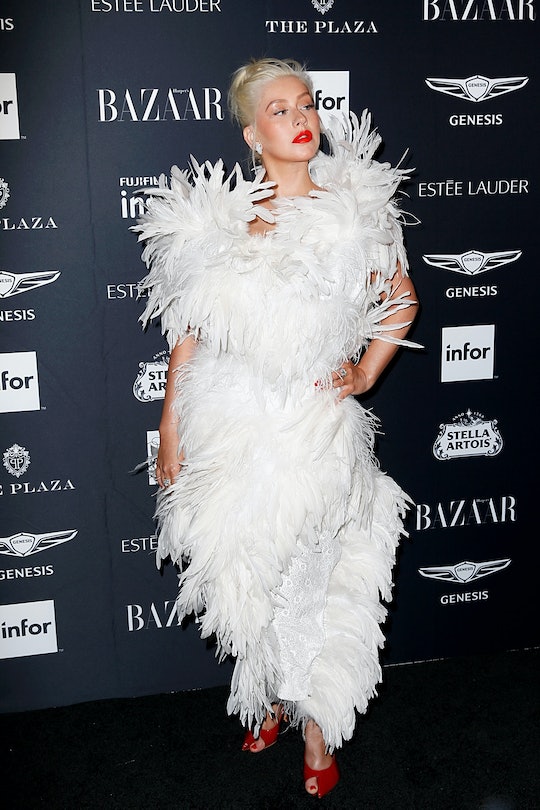 Dick Clark's New Year's Rockin' Eve with Ryan Seacrest is as known for its memorable musical performances as it is for the annual countdown. Who could forget Mariah Carey's feathery strut around the stage? This year, Christina Aguilera will be the headliner ushering us all into a new year. But what time is Christina Aguilera performing on New Year's Rockin' Eve? You'll need to know exactly when to tune in so you don't miss a minute.

The New Year's Eve special begins at 8 p.m. ET on ABC and continues almost unimpeded until after midnight (there's a break for Eyewitness News at 11 p.m.). There will be tons of performances over the course of those several hours, including Bastille, Dan + Shay, and New Kids On The Block, per Independent. And that's just on the East Coast; there will be even more performances on the West Coast and in New Orleans. But what about Aguilera?

Executive producer Mark Bracco was enthusiastic about Aguilera's upcoming performance while talking to Billboard. According to him, she'll be singing a medley of her greatest hits "right before the ball drops" in Times Square. So ahead of the stroke of midnight, you can catch Aguilera belting her best songs.

The official New Year's Rockin' Eve Twitter account confirmed that Aguilera would go on right before 12 a.m. Like past headliners, she'll be there to serenade the crowd in the final moments of the year. And that's something Aguilera knows all about, because this won't be her first time on the program. While talking to Billboard, Bracco pointed out that she had taken part in the event before, in 2007.

Now she's returning to ring in the new year more than a decade later. And that seemed like an ideal choice to Bracco, who said, "She's one of the most iconic voices in the world, so we couldn't think of anyone better to end 2018." Back in 2007, Aguilera performed "Candyman" and "Fighter," which could always be worked into this year's medley. It would be a nice nod to her previous appearance. The songs in her medley are still under wraps, though there's a good chance many of her biggest hits will pop up for a few lines.

In addition to the other artists joining her in Times Square, ABC7 NY reported that Post Malone would be performing in Brooklyn. The Ciara-hosted Hollywood party boasts its own lengthy lineup, with appearances by Camila Cabello, Charlie Puth, Dua Lipa, Halsey, Shawn Mendes, Weezer, and more. Lucy Hale will be handling the New Orleans broadcast, where Florida Georgia Line and Maren Morris will perform.

It sounds like the last night of 2018 will be packed with enough unmissable music to keep you bopping until the ball drops. If you're looking forward to Aguilera above all else, then you just have to wait until the very end of the evening (though some of these other performances will definitely help that time go by faster). Thanks to the wonders of Xtina, you'll be able to welcome 2019 on a high note. Literally.