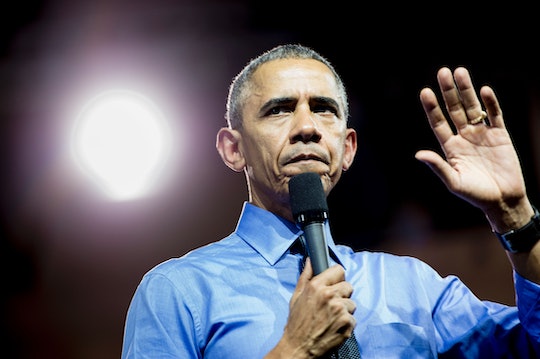 President Barack Obama will be saying goodbye to the American people in a farewell address on Tuesday, Jan. 10. This will be the last time Obama addresses the country as our president and, to be honest, a lot of us are already crying. It will definitely be hard to watch Obama close this chapter after eight historic years, and no matter what you think of his politics, his farewell address is not to be missed. If you're wondering how you can tune in and what time Obama's farewell address will be on, don't worry, it will be hard to miss this historic event.

President Obama and his family will return to their hometown of Chicago for the farewell address. The speech will be held at McCormick Place and will be broadcast on all the major television networks, such as CNN, Fox News, MSNBC, and CSPAN. It will air at 8 p.m. CST (9 p.m. EST), as well as livestreamed on the White House's official Facebook page and website. In other words, even if you don't have access to a television on Tuesday, you'll still be able to watch Obama address the nation.

The farewell address is a tradition for U.S. presidents, dating all the way back to George Washington. Our nation's first president used his farewell address to reassure his constituents and fellow citizens that the country is stronger united, rather than divided. Washington said that unity promised "greater strength, greater resource, proportionately greater security from danger" and that "your union ought to be considered as a main prop of your liberty." It's a safe bet that President Obama's remarks will be quite similar to his predecessors, especially because of who he's handing the presidency to.

George Washington isn't the only tough act President Obama will have to follow, though. His wife, first lady Michelle Obama, gave her final remarks to the nation earlier in the week. The first lady spoke at a celebration of school counselors, according to NPR, and used the opportunity to speak directly to America's young people. "It is our fundamental belief in the power of hope that has allowed us to rise above the voices of doubt and division, of anger and fear that we have faced in our own lives and the life of this country," Michelle said, getting visibly emotional during her speech. "Our hope that if we work hard enough and believe in ourselves, we can be whatever we dream, regardless of the limitations that others may place on us."

The president's wife certainly set a high standard for farewell addresses, but President Obama's own remarks will no doubt be just as sincere, hopeful, and optimistic. Make sure you tune in at 8 p.m. CST (9 p.m EST), whether on your TV or the White House's live stream, to see our president say goodbye after eight years of compassionate, unrelenting service to our country.