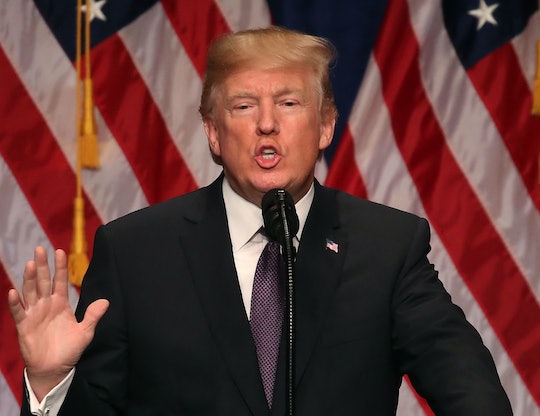 Every year, the time comes for the POTUS to update the American people on the progress of his term and the direction that the country is going in; this update comes in the form of the State of the Union. President Trump will give his first official State of the Union on Jan. 30, and it will air on live television at 9:00 p.m. Eastern Time. Given the action-packed first year of Trump's presidency, there will be lots to talk about. The theme and tone of his speech have been tweaked due to the recent government shutdown, but viewers can still expect to hear a bit about his plan for the coming year.

Each president traditionally gives a State of the Union in January or early February, according to Mic, shortly after Congress convenes on Jan. 3. Article II of the Constitution requires that the president:

Shall from time to time give to the Congress information of the state of the Union, and recommend to their Consideration such measures as he shall judge necessary and expedient.

But the vague timeline translates to once a year. However, most presidents opt out of making an official State of the Union during their inaugural year. Trump gave a State of the Union-style speech in February 2017, but this did not serve as his first true address since he was only in office for a matter of weeks, well before his program was in place.

This year's first official State of the Union will be held at the U.S. Capitol Building on Jan. 30, from 9 to 10:30 p.m. Eastern Time. It will be broadcasted live over all major news networks, such as CNN, Fox News, MSNBC, and CSPAN. It can also be live streamed on platforms including CBS News, the White House YouTube channel, and CNN's YouTube channel dedicated to the important speech. There will also likely be live streams of the speech over Facebook as well.

With the midterm elections on his heels, Trump is likely to use the highly televised affair to lay out his plan for the remainder of his term. A source inside the White House reportedly told Politico that the government shutdown has required the president to tweak his speech a bit, stating that the theme and tone of the speech are now "in flux." "Now is a natural time for the president to pivot from partisan activities to bipartisan activities," the source said. "But the shutdown is all about partisan politics." The source also suggested that Trump's strong feelings about the shutdown will likely make it into his final draft of the speech.

There are some aspects of the speech that have remained the same throughout the shutdown, according to White House aides. The speech will focus on two main issues: immigration and national security. Additionally, CBS News speculated that Trump will point to the economy as evidence of his program's success thus far.

Aside from the issues, there is another reason to tune in to the address on Jan. 30: the Democrats' response to his speech. Some Dems, such as Rep. Pramila Jayapal, a Democrat from Washington, plan to skip the address entirely. Metro reported that some female Democratic members of Congress will take a note from the Time's Up movement and the 2018 Golden Globes by wearing black to the speech, to protest sexual harassment and assault in the workplace. You may remember that House Speaker Nancy Pelosi and other Democratic women wore white to Trump’s address in February to support women’s rights. Rep. Lois Frankel, a Democrat from Florida, explained the decision in a statement, saying:

We wear white to unite against any attempts by the Trump administration to roll back the incredible progress women have made in the last century, and we will continue to support the advancement of all women.

Not matter how, or why, you choose to tune in to the Trump State of the Union Address, you won't want to miss this important broadcast. From the status of DREAMers to the shutdown, the president has a lot to address. Even if you don't agree with Trump's politics, every citizen should know the direction that the country is heading in.