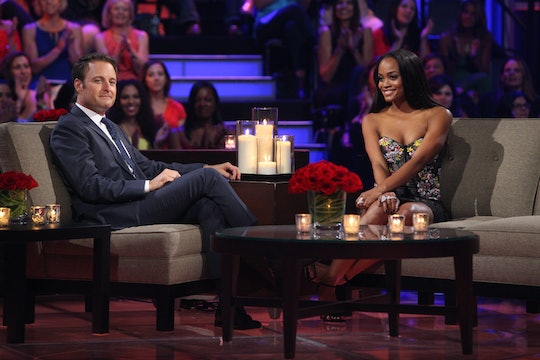 Here's How To Watch The 'Bachelorette' Finale

Well, Bachelor Nation, this season is finally coming to a close. With only Bryan, Peter, and Eric left vying for Rachel's heart, and the chance to put a ring on it, the stakes are officially high. Between's Peter's reluctance to commit, Rachel's family's dislike of Bryan, and Eric waiting to tell Rachel he loves her, all the remaining men have faced their share of relationship challenges. It honestly could go any way at this point (although, like it or not, I would probably put my money on #TeamBryan) and there's no way anyone who's gotten this far in the season isn't going to see how it ends. So what time is The Bachelorette finale?

We'll all find out who Rachel's fiancé is, the guy she's been gushing about in interviews for months, when The Bachelorette finale airs Monday, Aug. 7 at 8 p.m. EST. So set your DVRs, clear your schedules, get a babysitter, whatever has to be done to ensure that everyone can all devote the appropriate level of attention to this moment in Bachelorette history.

While Peter is the clear favorite to win, "anyone but Bryan" seems to be the general sentiment among fans. His lack of sincerity makes him hard to trust, and Rachel's sister had similar concerns, especially comparing him to both Peter and Eric, who both practically ooze sincerity.

My opinion? Fans (including myself!) are getting so passionate because it's becoming pretty clear that Bryan is most likely going to be the one to get the final rose. Not just to mention their matching watches, but Rachel has also said many times that Bryan is "too good to be true." In a recent interview, Rachel even defended her final three choices from fan backlash:

Eric, Bryan and Peter have all faced negativity in their own way. And you can never really prepare for it, because we're thrown into this public view and people all have their own opinions. And they've all faced it, and my fiancé definitely has as well. I think he's handling it in the best way he can. For me, I just have to be always positive and supportive. The thing is there's three guys left and every single one of them has faced negativity in their own right. And so, it's hard.

However this goes, can we all agree as fans to lay off Rachel when she makes her decision? Sure, after months of watching the show, I might think I know what's best for her, but the truth is, I've only seen her and these men on TV. They're all people who deserve the right to make their own choices, after all.