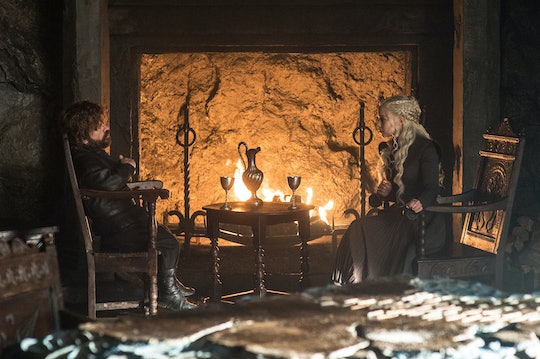 The 'Game Of Thrones' Season 7 Finale Is Almost Here

But actually, the show's extra long finale will air at its usual time on Sunday, Aug. 27 at 9 p.m. ET. However, while most network shows have about 44 minutes of action in an hour-long broadcast, the Game of Thrones finale will go on for a staggering 81 minutes, which is approximately as long as a feature-length film. This is also appreciated since with just seven episodes, this season of Game of Thrones is the shortest one yet. And the finale season is said to be even shorter with just six total episodes from start to finish. This, of course, means that the showrunners have just eight episodes left to wrap up each and every loose end that they've created throughout the years. I am both excited to see it and depressed that this Westeros journey I've been enjoying so much is about to end far too soon.

The final episode will probably answer some burning questions the previous episodes have left viewers with, as well as set up the action for the final season to come. Jon Snow and his motley misfit crew are marching past The Wall to accomplish a truly hair-brained scheme of Tyrion's. They are going to attempt to capture a wight to then bring to Cersei to prove to her that the army of the dead is real and thereby convince her to hold off on the war and join their ranks for the good of humanity. It's a weird plan.

The finale will most likely find some sort of resolution to the growing tension between Arya and Sansa, either for better or worse. Jon Snow and his dream team of outcasts will be heading towards King's Landing (that is if they succeed in their wight-catching mission), and Daenerys will either descend into full tilt bloodthirsty madness or allow herself to be reined in by Tyrion.

The real answers, of course, won't come until the eighth and final season, wherein I, personally, am looking forward to some White Walker and dragon action. But I have no doubt that Season 7 will leave us awestruck and anxious for more.