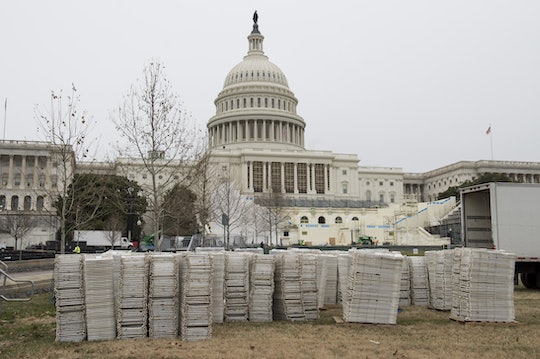 While three months ago the nation had a different guess as to what Jan. 20 would look like, Inauguration Day, the day Donald Trump officially becomes our country's 45th president, is quickly approaching. The event, which takes place in Washington, D.C., and encompasses a variety of events, protests, parades, and more, is guaranteed to be a wild ride, fitting for an incoming president like Trump. But no matter what your thoughts are on our next president, and if you are planning to celebrate or protest this momentous occasion, there's one thing you should know: What time is the inauguration?

Well, as with most highly-attended events, the start time of the 2017 presidential inauguration is a bit flexible. As this event is expected to have high turnouts, people attending the inauguration in person should expect long lines, and high security measures. According to the Washington, D.C. official city website, security gates will start screening attendees at 6 a.m. to begin lining up inside the National Mall. However, the actual even proceedings won't begin until the ceremony officially starts at 9:30 a.m., with opening remarks being made beginning at 11:30 a.m..

However, the big moment, when Supreme Court Chief Justice John Roberts Jr. will swear in Donald Trump, officially marking the beginning of his presidency, will take place at noon.

So, what can you expect while watching the inauguration? It's been no secret that the Trump administration has had a hard time securing performers for the event, with several celebrities turning down the invitation to perform.

This, of course, did not inspire a positive reaction from the PEOTUS.

The Mormon Tabernacle Choir and singer Jackie Evancho are both slated to perform at the swearing-in ceremony.

Following the swearing-in, the new president will start his parade towards the White House, a spectacle peppered with performances from the Talladega College marching band, and the Radio City Rockettes.

Of course, even those performances haven't been secured without scandal. Most notably, perhaps, a few of the Rockettes have (individually) spoken out against performing for Trump, and those who aren't contractually obligated to attend are tending not to chose to do so.

As this day is looking to be one for the books, it won't be over quickly. Following the swearing-in ceremony and parade, that evening will hold several inaugural balls, following the tradition of past inaugurations, with parties beginning at 7 p.m. ET that night.

Washington D.C. will be busier than ever, and the historic day will surely see plenty of protests, scandals, and more. But Inauguration Day 2017 will be an important event in our nation's history, so whether you're planning a trip to D.C. or just watching the live coverage, make sure you have as much information as possible to help you enjoy the festivities — onsite or from afar.