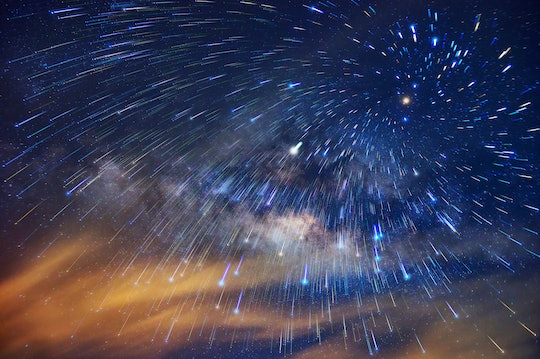 There are times when I am simply awestruck by the beauty of the galaxy and the wonders of this crazy place we inhabit. Whether it's the simple beauty of a flower or the wild spectacular other that is a falling star, I am regularly gobsmacked by the majesty of this world. One of the most sublime heavenly events to take place soon is the Perseid meteor shower. This theatre of falling stars happens fairly regularly, but it never stops reminding us just how huge this universe is. But, what time is the Perseid meteor shower? Because I have a bucket full of wishes to make, and I'm ready.

This year, the Perseid meteor shower will be visible to the naked eye on both the nights of Aug. 11 through 12 and Aug. 12 through 13, according to Space.com. However, Dr. Bill Cooke with NASA's Meteoroid Environment Office predicted that the superior night for viewing will be Sunday night into Monday morning. According to astronomers, this year's meteor shower is gearing up to be one of the best in recent memory. But to get the best view, Vox suggested staying up until about 11 p.m. or later to catch tons of meteor glimpses.

Meteor showers are a finicky thing. Sometimes they're these huge, resplendent events that resemble nothing so much as fire dancers leaping across the sky. At other times, you get all amped up, and there isn't a falling star to be wished upon. Thankfully, this one hopes to be special.

If you've ever wondered what a meteor shower is, according to NASA, it is "mostly small bits of stony grit, Perseid meteoroids were once expelled from Comet Swift-Tuttle and continue to follow this comet's orbit as they slowly disperse." Basically space rocks hurtling towards earth that catch fire in our atmosphere. I'm not going to lie, that really puts it in perspective. It also makes me wonder if we should start looking for an oil drilling team just in case they have to go into outer space to take care of business before it all gets too real. (It's also making me want to go buy some animal crackers and find a picnic blanket for me and my husband.)

Knowing that it's essentially space dirt doesn't detract from how gorgeous it is to watch. If you're wondering when it will be back, you don't have to wonder long. It will happen at almost the exact same time next year, according to In The Sky. Just remember it happens around Bella and Edward's wedding anniversary. (Don't pretend you didn't know it was coming up. You so did.) According to NASA, it happens within a few days of each previous year's shower due to the earth's rotation around the sun. Which, I probably should've figured out without looking it up. I'm bad at physics.

Dr. Bill Cooke with NASA's Meteoroid Environment Office told CBS that this year, it will be highly visible because "we won't have any moon messing it up. The moon will be setting early so there won't be much moonlight that will be interfering at night." It's also darned near a New Moon, leaving only a sliver of crescent to cast its otherworldly glow upon us as we attempt to gaze upon the heavens as fire comes roaring towards us from outer space.

According to NASA, Americans have the best shot at seeing the show because of the direction from where the meteors are flying in. It's going to be right over our heads, and for a period of time near dawn on Monday, there will be approximately a meteor every minute that won't feel at all like a doomsday countdown.

It's best to view the shower from an area with little to no light pollution, so people like me who live in densely populated areas probably won't see much. However, if you're in rural America, hold onto your hat — it's going to be something else.