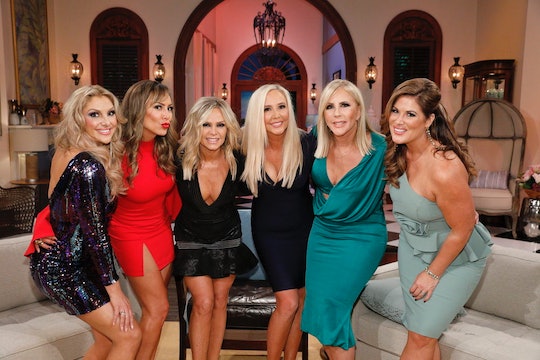 The 'RHOC' Season 13 Reunion Will Be Arriving Early

The Real Housewives of Orange County has had its ups and downs throughout Season 13. The addition of two new women, Emily Simpson and Gina Kirschenheiter, shook things up and caused friction with the rest of the cast. Old friendships were tested and more than a few ill-chosen words were screamed across a cocktail party. All that and more will be rehashed at the reunion, so you won't want to miss it. But what time is the RHOC reunion on?

The first part of the reunion (they're typically threefold) isn't airing at in its regular time slot, but instead on Sunday Nov. 25 a 9 PM. The episode summary promises that the women will address some of the most memorable aspects of the season, like Vicki Gunvalson's oft-repeated declaration that she's looking to marry boyfriend Steve Lodge, though they are not yet engaged. Gina will discuss her divorce, something that caused an unexpected argument with the other women when she first announced it. After their own acrimonious splits from past partners, they couldn't comprehend why Gina would want to separate from someone she still cared for so much. Perhaps she can shed some light on it during the reunion.

Vicki, Tamra, and Shannon will also reminisce about their trip to Mexico early in the season. That adventure resulted in Tamra breaking her foot when she dove naked into a hot tub after doing more shots than is likely recommendable. As far as Real Housewives vacations go, that lands somewhere in the top ten.

But after dishing on heartbreak and reliving some iconic moments from the season, it seems like the reunion will take a turn. Though generally friendly, Vicki and Kelly had a falling out this year when Vicki and Steve set up Kelly's ex-husband Michael with one of their friends and then proceeded to go on double dates with the new couple. Kelly was upset and betrayed by this, though she and Vicki appeared to smooth things over as the episodes went on.

However, the summary for the reunion states that "sparks fly when Vicki and Kelly go head to head, culminating in a shocking claim by Vicki." What could that possibly be, you might wonder? Well, a first look at the episode was posted by Bravo, and it reveals exactly what Vicki says that has Kelly up in arms.

After sharing some mild barbs ("loudmouth" is as scandalous as it gets), Kelly tells Vicki to turn around and look at herself in the mirror. In response, Vicki says, "I don't do cocaine." Unfortunately, no context is provided for the clip, so it's unclear whether Vicki's statement comes entirely out of nowhere or not. Kelly denies that she does cocaine while Tamra looks on, mouth agape. Accusations of recreational cocaine use are...actually surprisingly common on the Real Housewives, but they're certainly still shocking.

RHOC usually airs on Monday nights, but luckily the network has saved its viewers from having to wait that extra day. When the Sunday after Thanksgiving rolls around, you can settle in with any leftovers you've managed to save and watch all the drama unfold.