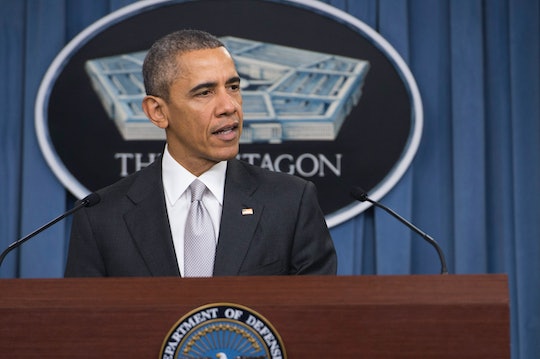 What Time Is The State Of The Union? It's Obama's Last Time Giving The Address

It seems like it was just yesterday that President Barack Obama took office and simultaneously made history for becoming the United States' first black president. Now, after two terms in office, he's preparing for his final — yes, final — State of the Union address to air Tuesday, Jan. 12, and it's one you won't want to miss. So what time is the State of the Union address? Viewers will have plenty of time to come home, get into their pajamas, and settle in with a pint of ice cream to watch the important event.

The White House has already conveniently uploaded a preview on YouTube featuring POTUS himself. In the video, Obama says he'll use the State of the Union address not just to go over the things he wants to get done, but to also discuss his optimism for the year ahead and the way our country has made progress and recovered from an economic crisis. "Since I took office 7 years ago in the midst of crisis, I don't think I've ever been more optimistic about a year ahead than I am right now," Obama says in the video. "I keep thinking about the road we've traveled together these past 7 years. ... To recover from crisis and set this country on a better, stronger course for tomorrow — that's what makes America great."

Viewers can watch the speech at 9 p.m. EST, and it will be available to stream online or on most major cable news networks. According to ABC News, top Obama aides have said this year's address will be "non-traditional" and that Obama will take a big-picture approach to framing the issues our country is currently facing, rather than going through a to-do list in legislation. An email from White House Chief of Staff Denis McDonough to the White House listserv also revealed that Obama will also mention what's at stake if a Republican ends up winning the 2016 election.

Obama supporter or not, it's exciting to anticipate what his last State of the Union address as President of the United States will cover, and whether or not it will influence the outcome of the next election.

Obama has been getting emotional a lot lately, so it wouldn't be surprising if he broke down in tears during this SOTU. He got pretty sappy talking about the things that make America great in his White House video about the speech on Tuesday, according to the video:

Our capacity to change for the better. Our ability to come together as one American family and pull ourselves closer to the America we believe in. It's hard to see sometimes in the day-to-day noise of Washington, but it is who we are. And it is what I want to focus on in this State of the Union address. Not just the remarkable progress we've made. Not just what I want to get done in the year ahead, but what we all need to do together in the years to come. The big things that will guarantee an even stronger, better, more prosperous America for our kids. The America we believe in.

Tune in on Tuesday to see what Obama addresses and how South Carolina Gov. Nikki Haley responds to the speech.