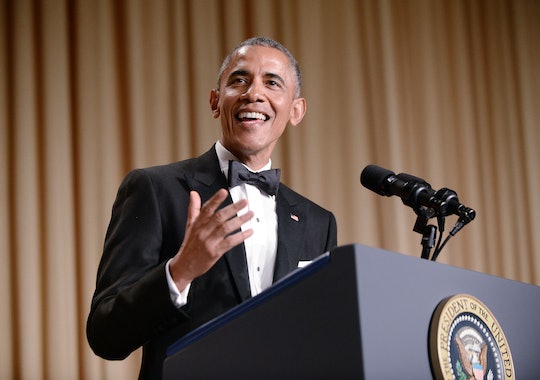 What Time Is The White House Correspondents' Dinner? It Airs Saturday Night

The dinner doesn't start until 7:30 p.m. where Obama and the keynote speaker for the night will be delivering their sure to be hilarious speeches. C-SPAN however, will begin the airing of the event at 6 p.m. so you can watch every single bit of the dinner.

The dinner will be available to watch both on your television, or be available to stream through C-SPAN's website. CNN will also be airing coverage of the event, starting at 7 p.m. So turn on your TV at 6 or 7, but the good stuff won't air until 7:30 — got it?

This will be President Obama's eighth and final White House Correspondents' Dinner, where in the past, Obama has cracked hilarious jokes at the expense of Donald Trump, Joe Biden, and yes — even himself. So I'm sure this dinner will be no different to those in the past. Plus, it is his last dinner which makes it all the more special to watch.

Larry Wilmore, of The Nightly Show with Larry Wilmore, will deliver the keynote comedic address and he won't be short on material. With everything that has happened in politics in the past year, and is happening in politics currently Wilmore has a lot to work with.

While I'm sure clips of the White House Correspondents' Dinner will be posted to the internet after the dinner is over, why not watch it live? When the event starts at 7:30 p.m. be sure to be watching.