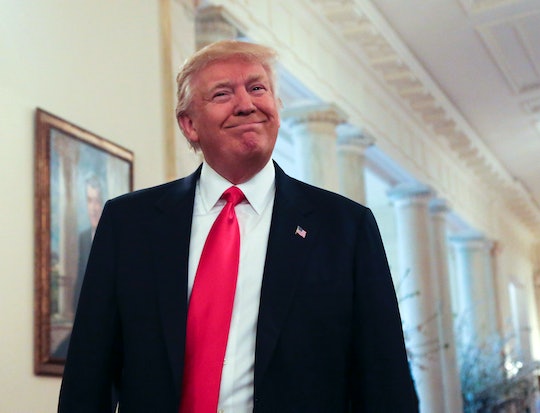 Set A Reminder For Trump's Address To Congress

If nothing else, you should at least know when to tune into Twitter to see what people are saying about the speech. The State of the Union, as defined in the Constitution, is a chance for the president to lay out information and then "recommend to their Consideration such measures as he shall judge necessary and expedient.”

If you want to hear what Trump thinks Congress should work on, make sure you're in front of your TV at 9 p.m. Eastern Time. It's going to be broadcast on all major networks, so just be happy he chose a Tuesday and not a Thursday (he's already messed with Scandal once this year). The White House will also have a live stream on its YouTube channel, as will CSPAN. You can watch it on CNN, MSNBC, Fox News on both TV and livestream.

It's anyone's guess what Trump's recommendations will be, but using the last month or so in office as a guide, there are some obvious points he'll likely make.

Press Secretary Sean Spicer told reporters last week that Trump would be discussing what some believe to be his accomplishments since taking over office and where he plans on going. So, really, anything Trump usually likes to talk about is fair game, even despite the fact that a White House handout this week highlighted a few likely topics (face it, Trump isn't known for sticking to the script).

Although he began his stint in the White House by getting rid of the Trans-Pacific Partnership (TPP), and re-opening the construction of the Dakota Access and Keystone pipelines, among other things, it's likely that Tuesday's speech will be a plea for Congress to not fight him on his new travel ban. After the 9th U.S. Circuit Court of Appeals suspended the ban earlier this month, the Justice Department had asked for more time to come up with a new version that addressed the court's concerns.

The court rejected that request and told the administration to submit a new one for review this week. While Congress has nothing to do with the executive order (hence the whole, you know, executive order thing), the primetime speech is a good place to make his case.

Trump will also likely address his plan to repeal the Affordable Care Act (or Obamacare, as it's commonly called). Given the talking points circulating numerous media outlets at the moment, he'll likely also address some of the things he campaigned on, like how he plans on "bringing jobs back," regulatory reform, and "inner city" violence. Then again, when it comes to Trump it's not good to make predictions. He might just want to talk about the Oscars or the mainstream media for all we know.

Whether you fear or adore him, Trump's address to Congress is not something you should miss — if only so you understand the Saturday Night Live jokes next week.