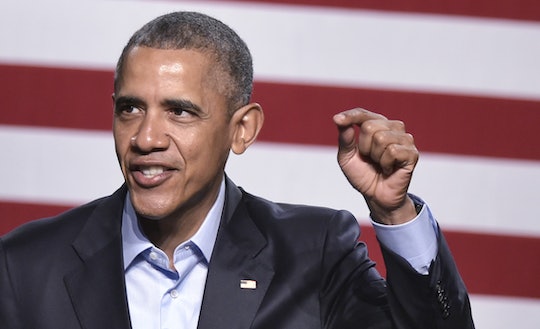 What Time Will Obama Speak At The DNC? The President Of The United States Speaks Wednesday

It will be a sad day when Barack Obama leaves the Oval Office come January. As an incredibly strong leader and great personality, Obama had it all. Luckily, there are still almost four months left in the year to embrace Obama's last TV appearances and speeches as President of the United States. This week, Obama will make an appearance at the Democratic National Convention and people will be wondering: What time does Obama speak at the DNC?

While the president is expected to speak on Wednesday, there is no specified time for which Obama will be speaking just yet. So, if Barack Obama fans were looking for a specific time slot to schedule the Head of State into their daily planners — they're out of luck. Luckily, the Democratic National Convention has released the order of speakers on Wednesday night so people can kind of assume when Obama will go on.

Obama will be speaking on Wednesday the 27th. And, if all goes according to plan, he will be the last speaker of the night, according to the Democratic National Convention's website. The list of speakers on Wednesday night start at 4:30 but there is no given end time. So, depending on how long the list of speakers speak before him (like Vice President of the United States Joe Biden), the later (or earlier) Obama will speak.

There might also be a little bump in the schedule. Since Clinton didn't announce that Tim Kaine was her Vice President until Friday night, the DNC schedule hasn't been changed to fit Kaine's headlining speech into the schedule. While Tim Kaine was scheduled to speak at the DNC before he was announced as Clinton's running mate — he does not have an official slot as a headliner on the DNC's website. This means that Kaine could speak before or after Obama on Wednesday making Obama's speaking time an even bigger mystery.

If those out there are worried that they won't be able to catch Obama's speech, don't worry. This year, the Democratic National Convention is conveniently being streamed on Twitter and Facebook so it will be very easy to tune in to Barack Obama's speech when it does happen (instead of having CNN on in the background all night).

While those might not be able to schedule their nights exactly around President Obama's speech on Wednesday, they can be assured about two things: 1. Obama's speech will be one of the last speeches of Wednesday night. 2. They will be able to watch the speech from any device when it does happen.

After endorsing Hillary Clinton, Obama's DNC speech will be vital to bring votes in Clinton's direction. In an interview on Friday, Obama told CBS News "...she knows her stuff. And more than anything, that is what is ultimately required to do a good job in this -- in this office." Expect more quotes like these to be in Obama's speech at the Democratic National Convention, when he does speak on Wednesday night.