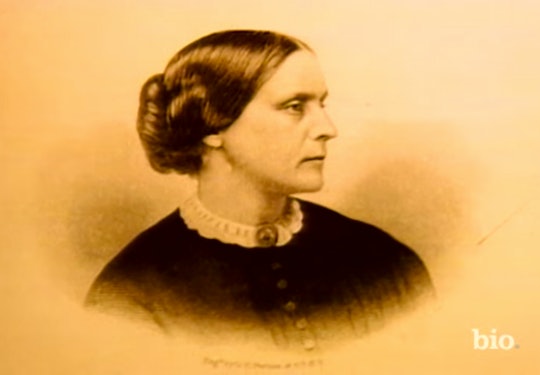 What Time Will The Cemetery With Susan B Anthony's Grave Close? It's Staying Open Late

It's kind of an understatement at this point to say that today's presidential election is a big deal to pretty much every American. The entire campaign cycle has dominated the headlines, has often been extremely unorthodox and controversial, and has created what feels like one of the most high-stakes election showdowns in recent memory. For many women, being able to cast a vote for a candidate who may become the country's first female president has been incredibly meaningful, and to commemorate that huge milestone, voters have taken to leaving their "I Voted" stickers on the grave of suffragist icon Susan B. Anthony. What time will the cemetery with Susan B. Anthony's grave close on Election Day? It's actually staying open late to honor the important day.

According to The Daily Mail, Americans have been stopping by the Mount Hope Cemetery in Rochester, New York, where Anthony is buried, to leave their stickers after casting their ballots. Rochester Mayor Lovely Warren called the act "a rite of passage for many citizens," and one that obviously holds a lot of significance to countless voters. Anthony fought tirelessly for women's right to vote, and was even arrested in 1872 for casting an illegal vote for Ulysses S Grant in the presidential election as an act of protest. Despite Anthony's dedication and hard work (along with a number of other brave suffragists who did the same), it wasn't until almost 50 years after Anthony's arrest — and 14 years after her death — that the 19th Amendment gave women (or, at least white women) the right to vote.

Now, of course, with Democratic presidential nominee Hillary Clinton on the ballot, Anthony's legacy feels even more significant. And according to The Washington Post, the cemetery is staying open late on Election Day to allow even more voters to visit and leave their mark. Although Mount Hope Cemetery normally closes at 5:30 p.m. on Tuesdays, today it will remain open until 9 p.m. Given the late closing, extra lighting has been installed to accommodate visitors arriving after dark, but it's been suggested that anyone anticipating arriving later in the day bring a flashlight as well, just in case.

The act of leaving "I Voted" stickers on Anthony's grave is thought to have been a tradition since at least 2014, according to Smithsonian Magazine, though it definitely seems to have taken on greater importance this election cycle. According to the Rochester Democrat & Chronicle, the cemetery is seeing "an overflow of crowds," today, so in addition to extending the cemetery's hours, guides and security have been put in place to help manage the influx of people. A welcome tent has also been set up at the cemetery's entrance to provide assistance and information to those arriving.

Warren told The Democrat & Chronicle that the extra attention given to Anthony today felt entirely fitting, and was wholly welcomed by the community:

We are proud of the unique legacy in the fight for equality that Ms. Anthony, along with Frederick Douglass and others, has given our city, and I can imagine she would have wanted to be a part of the significant history this year's election holds for women. It's only proper that we invite Ms. Anthony to be a part of this important moment.

On Twitter, users shared tweets, videos and photos of the crowds at Mount Hope Cemetery, highlighting the long lines that began early this morning:

Even though visiting Anthony's grave today is an incredibly symbolic and deeply meaningful act, many have also been quick to point out that, despite her undeniably valuable contributions, the history of women's suffrage in America has long been a sore spot for women of color, who were entitled to even fewer rights than white women, and Anthony's views on the matter weren't exactly inclusive.

According to The Root, many look back at Anthony's legacy and see that she used "strategic racism to reach her suffrage goals." For example, while she was anti-slavery, Anthony staunchly opposed the passage of the 15th Amendment, which would have made it legal for black men to vote. Arguing that it was unfair for black men to get the right to vote over women, Anthony said, "I will cut off this right arm of mine before I will ever work or demand the ballot for the Negro and not the woman."

Even more problematic, according to Women In World History, is the fact that Anthony and fellow white suffragist Elizabeth Cady Stanton wrote an article in 1869 arguing that women were more intelligent and moral than black men:

The old anti slavery school says women must stand back and wait until the negroes shall be recognized. But we say, if you will not give the whole loaf of suffrage to the entire people, give it to the most intelligent first. If intelligence, justice, and morality are to have precedence in the government, let the question of the woman be brought up first and that of the negro last ... There is not the woman born who desires to eat the bread of dependence, no matter whether it be from the hand of father, husband, or brother; or any one who does so eat her bread places herself in the power of the person from whom she take it.

Although this aspect of Anthony's history certainly doesn't invalidate her contributions to women's suffrage, or make it wrong to acknowledge them by visiting her grave, it is an important reality that needs to be remembered and understood. After all, while Anthony's feminism was important, it still excluded and discriminated against a lot of women, and specifically suggested they were less-than simply because of their skin color.

On this very important Election Day though, when so many voters are waiting anxiously to see if they will soon see the first woman POTUS, recognizing and honoring how far women have come since the days of women's suffrage still feels incredibly significant. And the unprecedented number of visitors to the Mount Hope Cemetery — where Anthony's grave represents a symbol of that progress —certainly seems to be a testament to that reality.