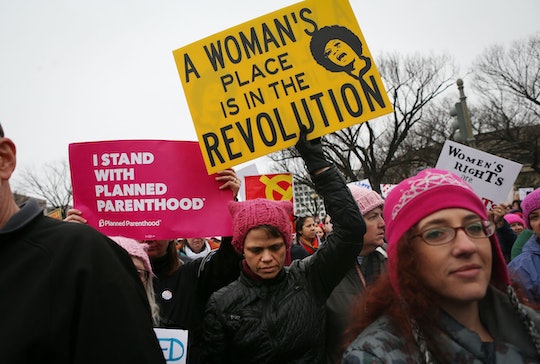 The Women's Strike Is An All-Day Affair

You've made your preparations and gathered your supplies. The poster board is purchased, the permanent markers are out of the package, and you've already Googled the perfect message for a hilarious, on-point sign. But... now what? As women across the world prepare for the Women's Strike — which takes place on Wednesday, March 8, in honor of International Women's Day — many are wondering what time the Women's Strike will start.

This international event will take place in a number of times zones, so for simplicity's sake, organizers define this as an all-day event that begins at midnight on Wednesday in your own time zone, and ends the minute before midnight on Wednesday evening. The Women's Strike is actually two coordinated, large-scale events wrapped into a single day. One of the events is A Day Without A Woman, organized by the Women's March, the folks behind the March on Washington. The other event is the International Women's Strike, a grassroots protest organized by a grassroots partnership of women.

The International Women's Strike and A Day Without A Woman both take place on March 8, and organizers are working together to make this a massive, unforgettable protest. Participants are asked to refrain from participating in both paid and unpaid work, wear the color red as a show of solidarity, and refrain from shopping and spending money, with the exception of "small, women- and minority-owned businesses."

Organizers recognize that many women won't be able to take a day off work. The Women's March website specifies,

We recognize that some of the 82% of women who become moms, particularly single mothers, may not have the option of refusing to engage in paid work or unpaid child care on March 8th. Many mothers have always worked and in our modern labor force, almost half of all households are women-lead, yet motherhood remains the number one predictor of poverty and a woman’s earning potential is diminished further with each child. We strike for them. Many women in our most vulnerable communities will not have the ability to join the strike, due to economic insecurity. We strike for them. Many others work jobs that provide essential services, including reproductive health services, and taking off work would come at a great social cost. We recognize the value of their contribution.

Women who can't take the day off are encouraged to wear red, and to speak with co-workers and friends about some of the issues that are important to the strike, such as equal pay for equal work, family-friendly policies, the gendered burden of unpaid domestic work, and gendered expectations about how women should "behave" in the workplace. The International Women's Strike also lists "childcare, diapers, cooking, sweeping, laundry, dishes, errands, groceries, and fake smiles" as the type of unpaid, gendered work that we all need to be talking about.

For those women who are able to take the day off, there are plenty of marches, demonstrations, and community events at cities throughout the country and world. Marches are planned for New York City, Chicago, Los Angeles, Boston, San Francisco, Philadelphia, and elsewhere, and according to the International Women's Strike website, women in 50 countries are participating in strike-related events.

So whether or not you'll be working on International Women's Day, there are plenty of ways to show your solidarity, from morning to night.