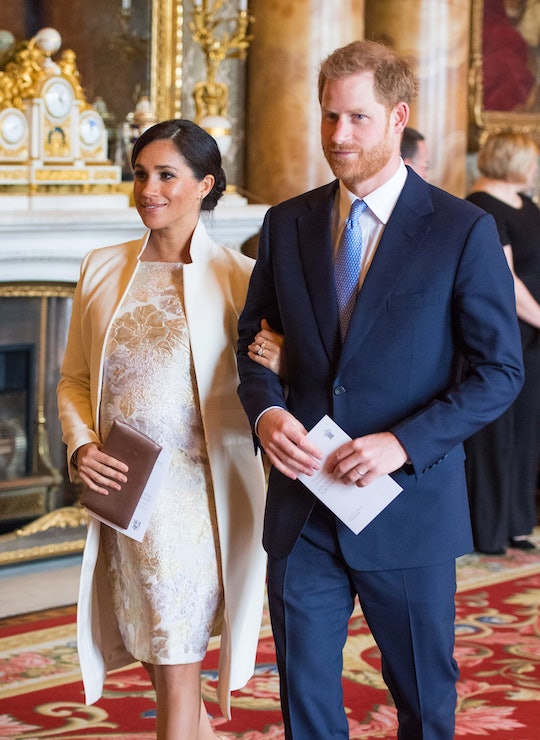 Meghan Markle & Prince Harry's Baby Will Be Here Soon, So What Title Will They Get?

There are many questions surrounding the royal baby who is expected sometime in April. Is it a boy or a girl? What will their name be? Where will the Duchess of Sussex give birth? And, of course, what royal title will Meghan Markle and Prince Harry’s baby have once they're born? For some of those answers, we just have to wait until the royal couple's little one arrives. But there are, at least, a few clues to help answer that last question.

The little one will be the first child for Markle and Prince Harry, and will be welcomed with great fanfare. But he or she won’t automatically become a prince or princess, despite being born to a prince. That's because, in 1917, King George V decreed that only the oldest son of the Prince of Wales’s oldest son — that’s 5-year-old Prince George, Prince William's oldest son — would be given the prince title automatically, according to Town & Country. However, when Prince William's wife, Kate Middleton, was pregnant with her first baby, the Queen issued what’s called a letters patent that decreed that all of Prince William’s children could carry the prince or princess title, according to Vogue.

So, as People explained, the Queen would have to intervene again to give Prince Harry’s child the prince or princess title.

But there are some royal titles that will be automatically passed down to Markle and Prince Harry's baby. According to a royal expert who spoke with People, “It’s traditional for the eldest son of a duke to eventually inherit his father’s title. If their baby is a boy, he could be known by the title Earl of Dumbarton, the secondary Sussex title, before inheriting the dukedom.” Children born second, third, and so one would be called Lord or Lady Windsor.

Surprisingly, Prince Harry and Markle also have the option of turning down any title bestowed by the Queen, according to Harper's Bazaar. In fact, Princess Anne, the Queen’s daughter, did that with her children, Peter and Zara Phillips, as the magazine reported. The Queen’s son, Edward, also asked for a lesser title than he was offered when he got married, so he is a duke now instead of an earl, according to Metro.

Beyond the upcoming royal baby's name and sex, another thing some people are speculating (and betting) about is whether Markle is pregnant with twins, according to TODAY, because people love a good theory, right? In fact, Paddy Power, an Irish betting company, had to suspend bets on the topic in November.

"An unprecedented amount of bets on Meghan and Harry to have twins has forced us to stop taking bets on the market altogether," the company said in a statement on its site. "Since the day began, the stream of bets has led us to believe that perhaps the punters — or an insider source — knows something more than we do."

Whether it’s one baby or two, Markle’s status as a citizen of the United States, should she keep it, may also provide her baby dual citizenship. As The New York Times reported, a baby born to a U.S. citizen living abroad, in wedlock, will be also be a U.S. citizen when they are born. That only happens if one parent has lived in the U.S. for at least five years, two of which have to have been after they were 14 years old. Markle certainly fits the bill.

For the rest of the answers on this little royal one, we’re all going to have to wait until they make he or she arrives. Hang tight, it shouldn’t be much longer.