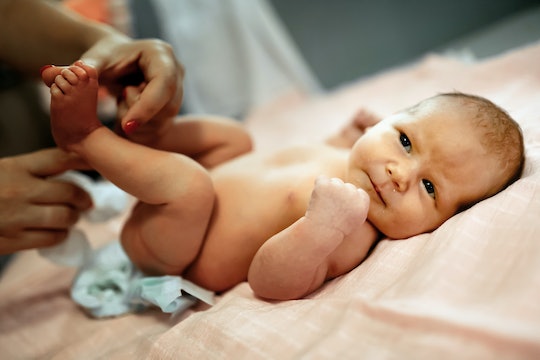 What To Do If You Can't Afford Diapers

For those of us who have enjoyed the privilege of baby showers filled with an abundance of cute organic baby clothes and tiered "cakes" fashioned out of diapers, it can be hard to believe that many families in the U.S. can't afford diapers (let alone onesies that say "The Snuggle Is Real"). But it is a very real, systemic problem. So what is there to do if you can't afford diapers, besides throw your hands up in despair? And if you can afford diapers, how can you help those that don't? According to the National Diaper Bank Network's (NDBN) website, one in three U.S. families can't afford diapers. And when you think about how many diapers an infant requires per day (breastfed newborns typically go through 6 or more per day, according to the site, Healthy Children), you can imagine how quickly all those Pampers add up.

There are, thankfully, some resources available for families in diaper need. The NDBN is one such organization, which, according to its website, (among its support and fundraising efforts), connects with diaper banks to collect, store. and distribute diapers to babies suffering from diaper need. In 2016, their site states, the network distributed more than 52 million free diapers (including 20 million donated by NDBN founding sponsor Huggies). The NDBN's website provides helpful tips on how to obtain free diapers or find diaper resources as well. They suggest calling United Way's local service number (2-1-1) and asking (or searching online) about "basic needs" or "diapers" or searching listings under "children". Another avenue they propose on the site, is to try local church, or food pantries as resources.

Another place to turn when you can't afford diapers is the National Diaper Network's Find a Diaper Page, which helps locate diaper banks in your area. If no banks are located, the Huggies website lists community social services agencies such as local women's shelters, publicly funded daycare centers, or public health facilities as being possible helpful resources.

Some might employ craftier ways of obtaining diapers, such as signing up for free diaper trials that various companies offer (e.g. The Honest Company) or filling out surveys that reward you with Amazon money. The "freebie" method is a bit tricky, as it often requires having a credit card, access to a computer, and that you stay on top of your "free trial" lest you get charged for the "real" subscription. For families in dire need of diapers, this probably is not the most realistic option.

Others may turn to cloth diapers as the answer to the expensive disposable diapering problem. Yet, as Forbes reports on its website (and as many moms may have learned the hard way), this can be a misconception (if you are planning on purchasing new cloth diapers). Nicole Kaeding, an economist in Washington D.C. and mother of a 15-month-old daughter, tells Forbes that there are a lot of upfront costs in going the cloth diaper route, especially in the first year. It's not until the second year, and with additional children, when the real savings start to come in.

One way to save money on cloth diapers is to buy used ones, which can cost up to half the retail price of a new cloth diaper. And if this is still cost-prohibitive, there are cloth diaper banks such as The Rebecca Foundation, which have provided thousands of families in need across the U.S. with free (reusable) cloth diapers to help circumvent those up-front first-year cloth diapering costs.

The technical term for not being able to afford diapers is "diaper need," and it is defined by the NDBN's site as "the lack of a sufficient supply of diapers to keep an infant or toddler clean, dry and healthy." According to a study published in Pediatrics in 2013 (and conducted in 2010), diaper need contributes to parental stress, particularly among low-income families. According to the study's abstract, this study is the first of its kind to examine how low-income families' needs for diapers impacts them on psychosocial levels. The study's findings show that the potential effects of not being able to afford diapers can be far-reaching, from impacting a parent's ability to work or to seek childcare for their child, to impacting the child's physical health.

For example, as the study finds, since daycare centers often require that a parent supply them with sufficient diapers in order for the child to attend, an inability to afford diapers creates a barrier to entry. Without a daycare option, parents who can't afford diapers therefore have trouble attending school or their own place of work. Furthermore, for those families in the study who practiced "stretching diapers" (i.e. using a soiled diaper multiple times), more doctors visits and emergency room visits per year were reported for cases of diaper dermatitis and UTI's in young children.

Being unable to provide a basic necessity such as diapers for a child, can also lead to self-esteem and mental health problems, the study finds. In her article for The Atlantic, journalist Olga Khazan reports on the types of sentiments women in the study shared with study co-author Megan Smith, assistant professor of psychiatry at the Yale School of Medicine. As one mother in the study recalled (and shared with Smith): "My self-esteem plummets. I can’t soothe my baby because I can’t put a clean diaper on my baby.”

A 2017 study (building on the 2010 study mentioned above) conducted by the NDBN and Huggies uncovers that diaper need is on the rise – with 36% of U.S. families struggling with it, versus the 34% reported in the 2010 study. Whereas the 2010 study surveyed mothers alone, the 2017 study included parents and caregivers as well. The new study also reveals that 2 out of 3 families surveyed were not aware that diaper banks even exist.

Being a family in diaper need is an extreme hardship. If you in a position where you can donate to or help those who are in need, there are lots of ways you can help that are listed here, on the NDBN's site. Victims of the recent hurricanes in Houston, Florida, the U.S. Virgin Island and Puerto Rico are especially in desperate need of diaper donations right now.