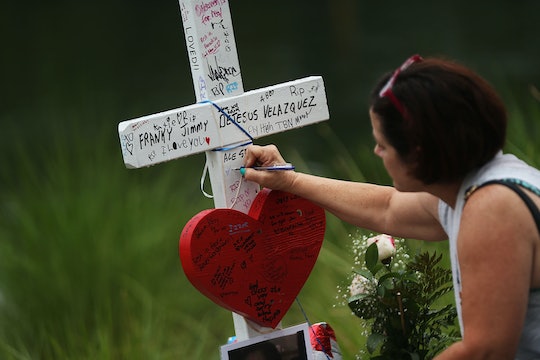 What To Do If You Have A Dangerous Family Member, Because You Could Help Prevent A Tragedy

The deadliest mass shooting in United States history happened June 12 at a gay nightclub in Orlando, when a gunman who had displayed violent tendencies all his life, mocked 9/11 as a teenager, and claimed connections to various terrorist organizations murdered 49 people. The FBI had even investigated Omar Mateen as a possible threat just a few years before he died during the gunfight with authorities that ended his attack on Pulse. He certainly exhibited warning signs, and the whole situation poses the question of what someone who believes a family member may be dangerous should do in order to stop yet another American mass shooting or attack from tearing its victims from the earth forever.

According to The New York Times, Mateen had even joked about bringing a gun to school in 2007, when he was training to become a correctional officer. Of course, the potential he had to murder nearly 50 people all at once seems crystal clear now that he's committed his heinous act, but it's vital that someone who suspects a person they know will do something like this say something.

Mass shooters don't fit a single profile, but, broadly, many have some similar major themes in their lives.

Still, as Rachel Romerance wrote in an article for The New York Daily News, most Americans simply aren't trained in threat detection. So, if you see something, say something is a tried-and-true rule of thumb, so that trained professionals can assess any potential threats, however small. The Atlantic reported that would-be shooters often tell someone else what they plan to do, so if a friend or family member talks about committing a violent crime, it's important to take the comment seriously, and alert law enforcement officials, as well as school authority figures, if applicable.

Identifying what behavior actually merits extra attention is much trickier. Marisa Randazzo, former chief psychologist for the U.S. Secret Service, told the Daily News that it could be something that "makes you stop and think and worry about the person," like if they write an essay with disturbing content.

Psychotic disorders play a role as well, although it's important to note, that most people living with them will never become violent. In a 2012 op-ed for CNN, emergency psychiatrist Dr. Charles Raison wrote about how to detect a mental deterioration in someone you know:

Sometimes it is obvious that someone has become psychotic because he or she says and does things that are indisputably bizarre, such as talking to themselves, espousing clearly strange and untrue beliefs, or not making any sense at all when talking... A person perhaps became more isolated and withdrawn. They began to fall away from their previous level of functioning, as evidenced by things such as dropping out of school. And as is very apparent from photographs, their appearances may change, becoming stranger and more disturbing.

But if someone you love may be violent or psychotic and dangerous, where do you go from there? It's best to contact the person's primary doctor, psychologist or psychiatrist, local psychiatric hospital, or just call 911. Paul Appelbaum, past president of the American Psychiatric Association, told the Daily News that talking with the person about seeking treatment is a good first step.

The challenge of alerting police, of course, if that law enforcement can't do much to punish a person if he or she has not yet committed a crime. And as Raison pointed out in his op-ed, "because of basic American liberties, [people experiencing psychosis] are protected from detainment or incarceration based on suspicion alone." But one person's speaking up can increase awareness of a threat and prevent a tragedy from happening.

By many accounts, mass murderers are incredibly difficult to profile, and the warning signs are oftentimes difficult to pin down. It's even hard to understand how and why Mateen — whose violent act didn't shock most people who had met him before the shooting — could kill on the scale that he did. But vigilance is still key, because if it saves even one life, it's well worth it.