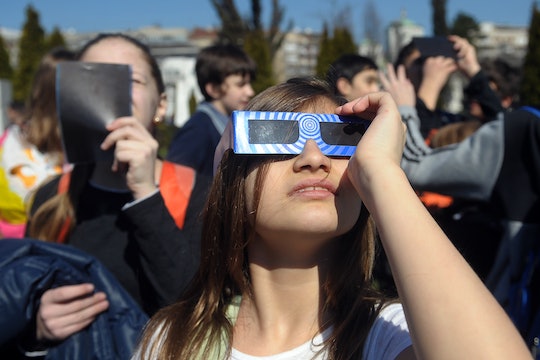 Here's What To Do If You Miss The 2017 Solar Eclipse

If you're living in the United States, then you're probably well aware of the solar eclipse making its way across the nation on Monday. For a brief moment, the moon will cover the sun, covering the nation in darkness for a few minutes. Needless to say, people are really excited about it — with people driving huge distances to see the best view of the eclipse and parties being thrown in the eclipse's honor. But, things do come up and not everyone will be able to enjoy the eclipse the moment it happens. And the beauty of it happening in this day and age is that you won't need to freak out if you miss the 2017 solar eclipse and can't watch it in real time like everyone else.

Just like the lesson the mom who asked to reschedule the eclipse learned, the 2017 solar eclipse is happening at an inopportune time this Monday. The eclipse will begin a little bit after 2 p.m. on the east coast and just after 10 a.m. on the west coast, according to CNN. With many people's workdays coinciding with those times and the start of many student's school years around the world, the timing of the solar eclipse is definitely imperfect.

If you miss the solar eclipse due to having to stay inside, you can watch the eclipse as it is happening on different streams on the internet. Twitter will be streaming the eclipse with the help of The Weather Channel on the website, in addition to NASA. Streaming the eclipse is a great option if you're stuck indoors but have access to a computer.

But if you don't have access to a computer throughout the day, you'll definitely be able to catch the eclipse on YouTube later in the day. In addition to the planned stream of the eclipse on different channels on the website, with the amount of users on the website, you can almost guarantee that one of your favorite vloggers will capture the eclipse on their camera. Check out YouTube after the eclipse happens for a first person take on the event.

See It On Social Media

Since this is the first solar eclipse many people (like myself) have ever seen, you can guarantee that their phones will be out to capture this beautiful phenomenon. From Instagram (and Instagram Stories), to Twitter, to Facebook — it's safe to assume that at least one of your friends will be sharing their view of the eclipse with their phone to social media.

And to add a little extra pizazz to these posts, Instagram will have new stickers for the eclipse on Instagram Stories and Snapchat will have special stickers and filters just for Monday.

If you miss the eclipse, just pull up any of your favorite social media platforms and watch the eclipse happen through the eyes of your friends.

Watch It On The News

CNN, ABC News, NBC, and Fox News will all be airing special reports about the eclipse as it happens, and will definitely be airing them again (or a part of them) during primetime when the regular scheduled news reports are. This is a great way to catch the eclipse a little after it happens and be briefed on all of the news headlines from the day at the same time.

See It Again In 7 Years

The next eclipse will happen on April 8, 2024. If you miss this eclipse, then you'll have 7 years to plan and prepare to see it again — making arrangements and getting those glasses just in time for the next big national eclipse. The path of totality will also be a little different, which is great for those who are getting less than 90 percent coverage in their area.

If you miss seeing this eclipse, you definitely won't be left in the dark. Indeed, with all these ways to see the eclipse again and again, you'll be able to partake in the all the fun and might not feel as much FOMO as you would otherwise.