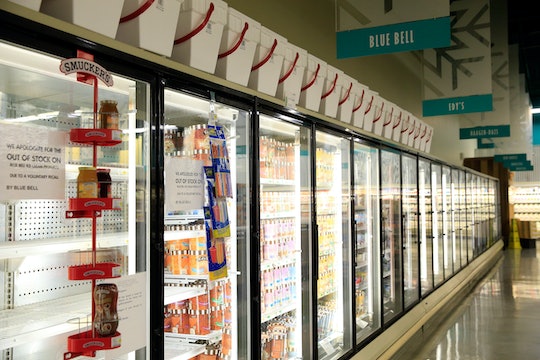 Thousands of pounds of frozen vegetables were recalled this week from places like Costco, Kroger, and Trader Joe's because of a listeria outbreak. While that may be a common headline, it's not to be taken lightly. Listeria is extremely dangerous, especially for pregnant women. Here's what to do if you think you ate a recalled product for listeria.

Doctors often advise pregnant women not to eat frozen foods or deli meats, and it's because of listeria. When consumed, listeria can lead to a life-threatening condition called listeriosis, which is most dangerous for expectant mothers, young children, the elderly, and anyone with a weakened immune system, according to the U.S. Centers for Disease Control. For pregnant women, it can lead to stillbirth, miscarriage, infection of the newborn, or premature delivery. If you are pregnant and suspect you may have eaten a contaminated food item, you need to see a doctor immediately. Though listeria is less common than other food-borne pathogens, like salmonella, it's much more dangerous. It is deadly for one in five victims, according to the CDC.

Symptoms to watch out for include include fever, muscle aches, nausea and diarrhea, though they usually begin a few days after you have eaten the contaminated food, according to the CDC. If treatment is not immediately sought, listeria bacteria can migrate to your nervous system, which makes the infection much more serious. It causes a stiff neck, headaches, confusion, convulsions, and loss of equilibrium. If you experience any of these symptoms, you need medical care immediately.

Unfortunately, this recall affected many stores, regions, and types of food, so it is very difficult to track and contain. More than 350 products — frozen green beans, broccoli, peas, blueberries — sold under 42 different brand names, at many different outlets in both the U.S. and Canada, have been recalled.

According to NPR, CRF Frozen Foods in Pasco, Washington, is the most likely source of the contamination. CRF has recalled all organic and non-organic frozen fruit and vegetables from its Pasco facility since May 2014. To check your frozen foods, check their UPC codes and "best-by" dates against the FDA's list. If any match, you can return the recalled food to the store where you bought it for a refund or throw it away. In either case, it should be discarded and not, under any circumstances, eaten. Like most bacteria, listeria can be killed if food is boiled, but given the risks, it's not worth it.

If you have a confirmed listeria infection, your doctor will be able to treat it relatively quickly with antibiotics. Even without any confirmation, if you suspect you may be infected, see a doctor as soon as possible.