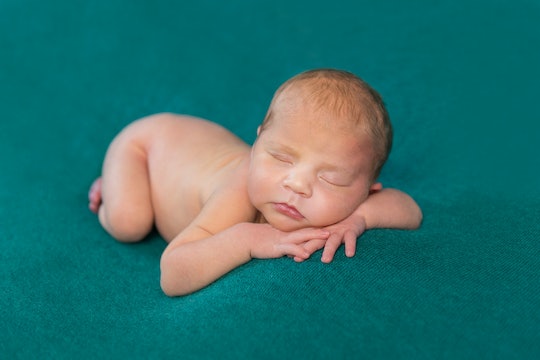 What To Do If Your Baby Won't Sleep On Their Back

Most new parents have been bombarded — by loved ones, pediatricians, and the internet — with recommendations for safely putting your baby to sleep. Over and over again we're told to keep our baby's crib free of blankets, covers, or pillows, and place them on their back every single time they get some shut eye. So, what do you do if your baby won't sleep on their back? After all, watching your baby twist and turn and flip over when you know they're supposed to be sleeping on their back is enough to make any anxious parent lose a night (or 15) of sleep.

The official recommendation for babies to sleep on their backs came from the 1994 "Back to Sleep" campaign, spearheaded by the National Institute of Child Health and Human Development. The campaign advises parents to "always place baby on his or her back to sleep for all sleep times, including naps." Now called the "Safe to Sleep" initiative, it the campaign resulted in a 60 percent decrease in Sudden Infant Death Syndrome (SIDS) incidents in the United States alone.

In the ensuing years, the message to place babies on their back for sleep has continued to be the most important safety advice recommended by medical professionals. In a 2012 report in the Pediatrics and Adolescent Medicine Journal, researchers reiterated the advice, and even stated that the sometimes common "side sleep position" is not a safe alternative.

The fact that babies should be on their back when they sleep,doesn't necessarily mean our little ones are going to automatically comply with this necessary recommendation, though. So, what should you do if your baby inexplicably ignores your advice and flips right on over to their side or tummy?

Although sleep recommendations advise that babies sleep on their back for the first year of their life, The American Academy of Pediatrics states it's "particularly important during the first six months, when the incidence of SIDS is the highest."

Thankfully, many babies are not able to roll over immediately after, or even for months after, they're born. Some babies do start rolling over when they're 4 months old, however, which is when so-called "sleep positioners," essentially wedges and cushions that aim to keep your baby in one position while they sleep, come into play. These products are not a safe solution, though. In 2010, The Food and Drug Administration (FDA) issued a warning not to use sleep positioners and after "two recent deaths underscore(d) concerns about suffocation." The FDA went on to advise parens stop using infant positioning products, saying "using this type of product to hold an infant on his or her side or back is dangerous and unnecessary."

If your baby constantly turns over when placed on his or her back for sleeping, there is no need to be alarmed. In fact, if they are strong enough to turn over they are already out of the high SIDS risk group of very small infants.

So instead of spending money on products that may do more harm than good, or losing a probably very necessary night's sleep, try waiting until your baby is in a deep state of sleep before transitioning them to their own sleep space and ensure you follow the ABC’s of safe sleep: Alone on the Back in a bare Crib.