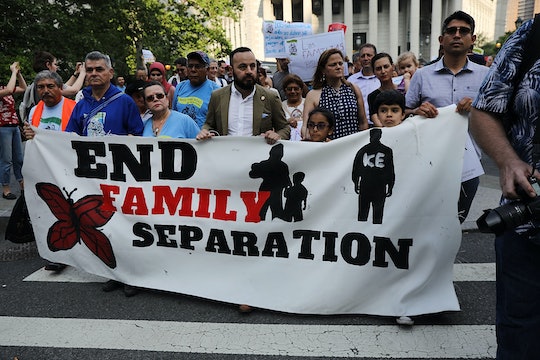 Is Your Congressman's Mailbox Full? Here's How To Tell Them You Oppose Family Separation

If you're opposed to the family separation policy, then calling your local congressman to protest is one way to make your opinion known. But sometimes all you get in response is a full mailbox, and no way to leave a message. In this case, knowing what to do if a congressman's mailbox is full will give you plenty of additional options. Don't give up just yet.

Given the controversial nature of the family separation policy, it isn't surprising that so many people are trying to make their opposition known to representatives right now. Basically, the policy results in the separation of parents from children at Mexican border crossings. And it's affecting a large number of families. From April 19 to May 31, roughly 1,995 children were separated from their caretakers at the U.S. border, according to TIME Magazine. Although many citizens have expressed outrage at this policy, leaders are standing by it. "If you cross this border unlawfully, then we will prosecute you. It's that simple. ... If you are smuggling a child, then we will prosecute you and that child will be separated from you as required by law. If you don't like that, then don't smuggle children over our border," said Attorney General Jeff Sessions, as noted in NPR. Plenty of Americans disagree with this separation of parents from children, and there are still many ways to make those opinions known.