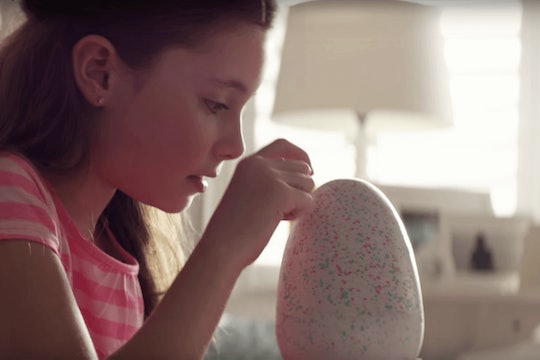 What To Do If Your Hatchimal Isn’t Hatching

Now that it's been almost a week since Christmas and the start of Hanukkah, the real test of the staying power of all those holiday toys begins. There are thousands of children who would like nothing more than to be playing with their freshly hatched Hatchimal during this winter break school vacation week, but according to a whole host of disappointed kids and their angry parents, the hottest toy of the season hasn't yet lived up to its name — they've got an unhatched Hatchimal, despite their best efforts. SpinMaster, the toy's manufacturer, has some helpful tips about what to do if your Hatchimal isn't hatching. SpinMaster did not immediately return Romper's request for comment.

Seeing as how the actual hatching process of Hatchimals is not only its pivotal selling point, but in the toy's very name itself — it's understandable why some parents are more than a little peeved with SpinMaster, especially when some paid well above retail price for the hard-to-find, sellout holiday toy. Some Hatchimals have sold for hundreds of dollars, and if I paid that much for a broken toy, I'd be rightly PO'd myself. Since Christmas Day, SpinMaster has been flooded with angry tweets, Facebook posts, and a steady stream of calls to the SpinMaster customer service line. So what should you do if your Hatchimal isn't hatching?

With the deluge of complaints about Hatchimal duds, SpinMaster posted an announcement on its website, noting that "customer service message and call volumes are unusually high due to the holidays" and that the company is "100% committed to bringing the magic of Hatchimals" to everyone who bought one this holiday season. SpinMaster also listed three quick tips that seem to solve most of the issues that parents have been calling about. Here's the rundown on what you can do if your Hatchimal has stalled.

Since Hatchimals don't have power cords, this is the default "Have you tried turning it on and off again?" trick. This is also SpinMaster's first recommendation before you try anything else. If you're wondering how long it takes a Hatchimal to hatch, it's about 25 minutes until they can start hatching and the hatching process can take up to 40 minutes, according to the Hatchimals website.

The Hatchimals website instructs users to find the plastic "locks" on the bottom of the Hatchimal shell, turn them 90 degrees, and pull them out. Spoiler alert: This is the Hatchimal's secret method to start the hatching process.

Convince Your Child To Wait Patiently Without Touching It

The third recommendation from SpinMaster is to put the Hatchimal down on a flat surface and give it a breather for a minute or two, without touching it. Piece of cake! That should go well. But in all seriousness, the no touching part is crucial, as the technology behind the hatching relies on both touch and motion to activate the hatching process.

In addition to a statement, there is also a new Hatchimals video, "Top 5 Things To Know About Hatchimals" that is basically a thorough explainer on every tip and trick you can think of. The biggest takeaway from the video is that when all else fails, set the Hatchimal down, take your hands off, wait three seconds, then shake the ever-loving crap out of it — I mean, give it lots of "love."

If All Else Fails, Get Out The Scissors

It's totally possible to cut open your Hatchimal. Yes, it takes out about a zillion percent of all the fun of the toy in the first place, but desperate times call for desperate measures. I just wouldn't do it in front of your kids... It's pretty traumatizing. Happy hacking, I mean — hatching!