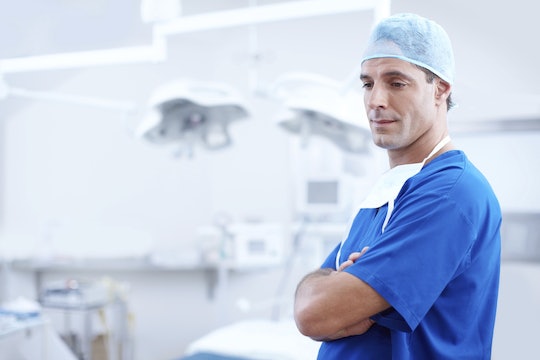 You've been waiting in the lobby of their office for 45 minutes. You have to pee, you're hungry and cranky, and you just want to leave. Your OB-GYN calls you in and on top of everything else, they're rude, condescending, and they aren't listening to you. It's disheartening, but you don't know what to do if your OB-GYN is a jerk. You're already six months pregnant. Should you say something? Leave? Stick it out?

First off, is this the first time your doctor has behaved this way? I know I've had bad days where I'm less than proud of my behavior. Maybe they just lost a patient, or they're having family issues, or their car was stolen. Things like this tend to color one's behavior, even if they don't mean for them to.

Now, you need to determine if they are making you uncomfortable or just angry. If it's the former, say something immediately, and ask to be seen by another doctor at the practice for that day's appointment. If you're not comfortable with that, leave. You should never feel threatened by your OB-GYN or their behavior. There is no such thing as "too late in a pregnancy" to leave a provider.

According to the Journal of General Internal Medicine, the attitude of the doctor can negatively or positively impact outcomes for their patients. If a doctor doesn't communicate clearly, or does it with a note of condescension, the patient may experience a greater anxiety, making them less able to communicate their needs effectively, and things can go awry.

If this is a one-off incident, chalk it up to as much — unless they're truly out of line or hurtful. If they are, you can either switch providers, or communicate with them how you are feeling. If the doctor can't handle criticism, they shouldn't be a doctor.

If you feel like you need to leave, (remember that your feelings are always valid, even if you think it's hormonal), you don't need to tell your doctor why, noted Kevin Pho, MD, on his popular website — you can absolutely ghost on a doctor. If they made you uncomfortable, or were rude, they don't deserve your additional time. Just because they went to school for a really long time and you pay them a great deal of money, doesn't make their feelings more valuable than your own. Think they're likely to make other patients feel the same way? Report it to your state's medical board or to the hospital wherein they attend. Beware before writing a Yelp review, though — lately doctors have been firing back, and even suing patients, according to an article featured in The Washington Post.

When you get to your new provider, make sure that you have them request your records from your old doctor straight away, and complete a thorough medical history for them, leaving nothing out. Communicate to your new provider why you left your former doctor, and lay out your expectations immediately.

When you think about what to do if your OB-GYN is a jerk, remember, this is your body they're treating, and while they may treat many, you're only given the one. You have to be your own best advocate, and know when to step up, speak out, or step out, and don't apologize for it.