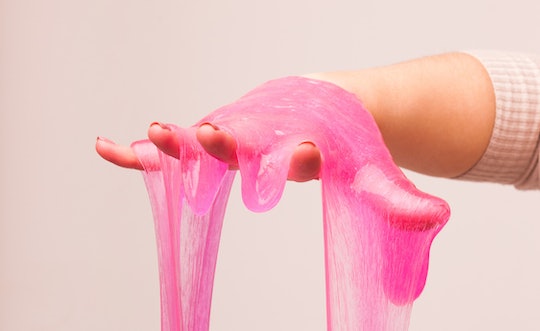 How To Make Your Too-Soft Slime The Perfect Consistency

Summer family vacations usually involve days spent frolicking in the water or exploring the great outdoors. But what do you do if the weather doesn't cooperate and you find yourself cooped up with your kids indoors? If you have access to a few simple ingredients, you make slime — the perfect anecdote to a rainy day. Slime is easy to make but that doesn't mean you can't screw it up! Too hard, too sticky, too soft, there are many slime pitfalls. If you're wondering what to do if your slime is too soft, don't worry, there's a way to get your slime — and your vacation — back on track.

There are actually an insane amount of different slime recipes out there, but I personally like this one from The Kitchn that doesn't call for any borax. By combining three simple ingredients —glue, baking soda, and contact lens solution (something you probably have packed in your toiletry bag anyway) — you get a super fun slime that will entertain your kids for hours. You can throw in some food coloring and glitter too and voila — you're really a vacation hero. If your slime is too soft, or slimy, The Kitchn recommends adding in 1/2 tablespoon more of lens solution as needed.

Another great slime recipe comes from Fun at Home with Kids, and uses laundry detergent of all things. By combining a PVA-based glue (Elmer's qualifies) and some Tide Free & Gentle, you're on your way to an awesome slimefest. However, if you find yourself with a really soft or stringy slime, here's what you do: "First, pour off any standing [laundry detergent]. Then add clear glue approximately 1/4 cup at a time and stir. Once the slime starts holding together, you will need to knead it by hand. After adding glue and kneading for 2-3 minutes, it will be just like new! It will gel even more if left overnight in a sealed bag," advised the slime masters of Fun at Home with Kids.

If you swear that borax is the secret to making a winning slime, you'll want to watch this YouTube video by andreaXandrea, which boasts "Slime hacks to make the best. slime. ever" in its title, and has almost 3.5 million views. If your slime is too soft, or slimy, the YouTube host recommends adding a light borax mixture — 1/2 teaspoon borax to 1 cup of warm water — to get it back to the consistency you want.

Last but not least, you can make something called Glooze Slime, which calls for skim milk, vinegar, and some baking soda. If you're like me, you might be wondering how exactly these ingredients form slime and not, say, a dough to make muffins! "When you added the vinegar to the milk, it caused the milk’s protein, casein, which is also a polymer, to separate from the liquid part of the milk and clump together to form solids. Casein is used in adhesives, paints, and even plastics. The baking soda neutralizes the acid added, which allows the casein to go back to its liquid form," according to Home Science Tools. If your Glooze slime is too soft or liquidy, it would stand to reason that you should add more vinegar since, per Home Science Tools' explanation, the vinegar causes the milk's protein to separate and clump together.

While I do love a good slime experiment, one thing I do not love is trying to get it off my children's clothing. Fortunately, there's an easy solution to that conundrum too — vinegar. Simply saturate the slime with vinegar, soak for a couple of minutes, and wipe away, advises A Typical Mom's Blog.