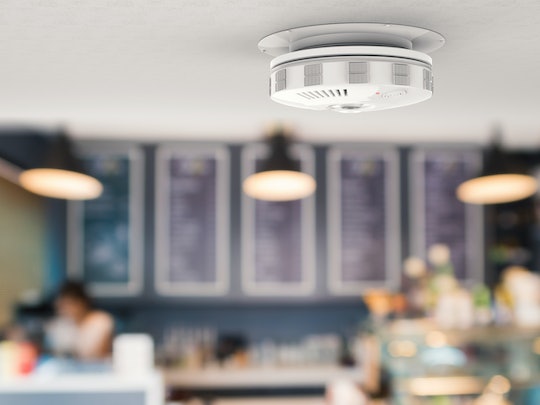 It can be scary when an alarm suddenly sounds to alert you that a harmful gas is leaking through your home, especially if your carbon monoxide detector is going off. That insistent beep can be, well, alarming. It's normal to be concerned (after you figure out which detector is sounding), but there's enough time to act without panic. Your detection device chirping means you have the opportunity to take immediate steps to determine or correct the problem. So, what exactly do you do when your carbon monoxide alarm goes off?

Carbon monoxide (CO) is widely known as the "silent killer" among fire safety professionals, Vito Maggiolo, public information officer for DC Fire and EMS Department in Washington, D.C., tells Romper. That's because the gas is odorless, tasteless, colorless, and doesn't cause irritation. However, as the Mayo Clinic reported, CO is deadly to people even if they inhale small amounts of it. So it's important that you don't ignore the insistent sounds, because "the purpose of the alarm is to alert you to potential dangers or exposure to carbon monoxide," Maggiolo says. You'll know it's your carbon monoxide detector going off because, unlike the familiar, ear-splitting shriek of a smoke alarm, detectors for CO emit squeaks, chirps, or beeps, as the website for ADT explained (often in a series of four beeps every four seconds).

The first action you want to take is to get yourself and your family outdoors into the fresh air, per the Energy Resource Center, a Colorado-based energy efficiency nonprofit. You can reset the alarm if you want to stop the beeping. Then, Maggiolo tells Romper, residents should dial 911 and await emergency responders. If for any reason you're unable to leave your home, open up all the windows and doors to ventilate the space and help dilute the CO.

Residents should tell the dispatcher on the phone that they believe the carbon monoxide alarm is sounding. "We dispatch units that are equipped with monitoring or detection devices. [On arrival], we'll go into your home and confirm or deny the level of carbon monoxide that may be there," Maggiolo explains.

Because CO is the result of "incomplete combustion," he says, it means emergency responders will begin looking for the source of it leaking into your home. That could be a gas-powered appliance, like a stove, a furnace, or a water-heater. Motor vehicles also produce carbon monoxide. Maggiolo tells Romper that responders will then turn off the appliance once they discover the source of the problem, ventilate the home to remove the gas with high-powered fans, replace the fresh air, and re-seal the area before running a test to make sure they've found the only emission of CO.

"Once [carbon monoxide readings] are back to normal," he explains, "the home is safe to re-occupy."

Even though the "silent killer" is virtually undetectable by human senses, Healthline reported that the gas does cause symptoms including a headache, nausea, vomiting. If you are worried that you or someone in your household has CO poisoning, head to the nearest emergency room.

But residents should know that even once emergency responders have cleared the home of CO, there's still more work to be done. "Before the [resident] turns back on the [gas-leaking appliance], they would need to bring in a qualified, licensed repairman to fix what the problem was," Maggiolo says. If not, they risk a recurrence of the incident when they turn the device back on.

Although your alarm going off might cause you some inconvenience, it's important to take the potential for a CO leak in your home seriously, every single time. False alarms do occur for various reasons, as KTVI reported. Besides the general annoyance, USA Today also reported that false alarms from carbon monoxide detectors can be dangerous because they may dull your response to emergency. You should replace dead batteries in your alarms when you hear that tell-tale signal to change them. And if you can't trust your carbon monoxide detector to literally save your life, it's time to buy a new one.

More Like This
Can You Light Fireworks In Your Backyard?
The FDA Is Warning Parents To Not Use Baby Neck Floats After One Infant Died
6 Takeaways From The White House’s First-Ever Parents Press Conference
5-Year-Old Boy Died In Hot Car As His Family Prepared For Sister's Birthday Party