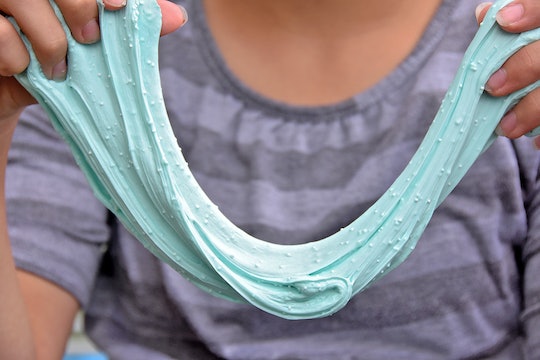 How To Fix Chunky Slime, Because Tossing It Feels Like Too Much Of A Waste

I thought that having a 2-year-old as my oldest child meant I was exempt from this slime fad for at least a few years. Surely, by that time it would fizzle and I could avoid getting my kitchen covered in goo, right? Wrong. One text from a friend of a slime recipe with glue, baking soda, and contact solution, and I was wrist-deep in slime. While I managed to make nearly perfect slime the first time around, the second time I tried it was a total fail and I had to figure out how to fix chunky slime, because my kid will not let me throw it away.

When your slime is too chunky, you might need to add more glue, or so said slime expert Asia Citro, author of the blog Fun at Home with Kids. She explained that chunky slime can occur if you are using a recipe that calls for liquid starch and you add too much. She suggested, "First, pour off any standing liquid starch. Then add clear glue approximately 1/4 cup at a time and stir." She explained that you should knead it by hand for a few minutes until it comes back together and should be "good as new!"

There are several different recipes for slime, some necessitating liquid starch and others requiring baking soda and contact solution. Whatever the recipe, WikiHow has a whole range of solutions to revive your slime. I'm not sure I'd bother trying more than one or two. I think I'd just start over at that point, but if your kid is really committed to their slime coming back to life, you can try adding antibacterial gel, water, lotion, or even a combination of those. WikiHow explained that soaking slime in warm water, microwaving for ten seconds, then adding lotion can successfully revive some slimes. Who knew?

Preschool Inspirations, a blog with ideas for teaching children through play, can help troubleshoot your slime problems as well, including a post full of reasons why slimes fail and how to fix them. It's hard to believe we live in a world with so much time and attention paid to slime, but here we are. The site explained that a slime recipe can fail due to several reasons, including using the wrong glue, not measuring precisely, or not following the directions exactly. They suggested that one "reason that slimes fail is that the ingredients need to be broken down a bit before they are mixed together," meaning you really need to read and follow those directions carefully (with your kids, of course) to know which ingredient needs to be mixed with what first, and make sure that everything is properly mixed between each step.

Another reason your slime may not turn out as planned, according to Preschool Inspirations, is that you simply live in the wrong country! If you're using a slime recipe that calls for a saline solution, you'll want to make sure that the type of saline you're using is the same one that the recipe intended for, as some have borax in them and some do not. Otherwise, your project will likely not come together.

Of course, if you aren't excited about the treating your kid's slime as a science experiment, you can always order a slime kit, which should have the perfect ratios of most crucial ingredients all measured out. Elmer's has certainly capitalized on the craze by offering slime kits for sale for as little as $7 on Amazon, and if all else fails, you can always buy pre-made slime and call it a day.