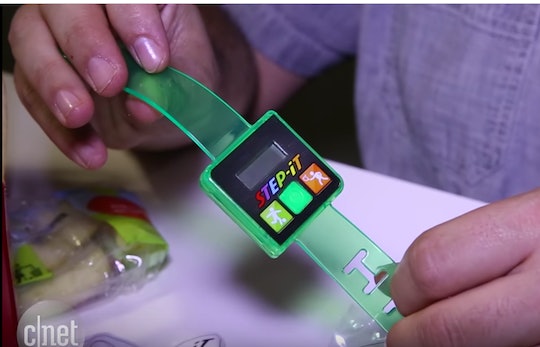 What To Do With Your Recalled McDonald's Fitness Tracker

There is no denying that it is easier to eat a cheeseburger than it is to go on a three mile run. While the latter might be more of a challenge, it is great when fast food companies can find unique ways to promote health in their restaurants — through healthier food options or just encouraging people to go outside and be active. Unfortunately, one health-centric promotion from fast food chain, McDonalds, has led to a nation-wide recall and now many parents are left wondering what to do with their recalled McDonald's fitness tracker.

The "Step It!" fitness trackers — which were recently included in the company's famed Happy Meals — reportedly caused skin irritation and burns from the wristband, according to USA Today. After receiving 70 different complaints, the U.S. Consumer Product Safety commission called for a voluntary recall of 29 million wristbands within the United States and 3.6 million wristbands in Canada. Talk about one unhappy meal.

According to Engadget, the trackers — which came in six different colors — were meant to blink slowly or quickly depending on the activity of the person who was wearing it. The wristbands were included in the meals purchased anywhere between Aug. 9 and Aug. 17 and according to City News, was intended to coincide with the Olympics— a major event which McDonalds sponsors.

But if your child was one of the millions that ended up with a "Step It!" fitness tracker, there is just one thing you can do — exchange that not-so-sweet treat for an even sweeter one at McDonald's.

According to the McDonald's website, if parents are in possession of the fitness tracker, they need to immediately take the wristband away from their child's possession. Then, they can return the wristband to any McDonald's restaurant in exchange for a replacement toy and a yogurt tube or a bag of apples.

We recently received reports involving skin irritation and burns after wearing the wristband. We take all reports seriously, and upon further investigation, we immediately stopped distribution of the wristbands from our restaurants and from our customers.

The fitness tracker was meant to promote playing, according to City News. "Step-It! is in line with McDonald's general philosophy for Happy Meal toys, which is to make toys that encourage physical or imagination-based playing," McDonald's Canada Senior Marketing Manager, Michelle McIlmoyle told City News.

While McDonalds did mean well, unfortunately, the "Step It!" fitness tracker had negative consequences for the dozens of children who were injured while wearing the wristband. If your child is one of the millions who received one of the wristbands in their Happy Meal, do not hesitate to bring it back to McDonalds for a safer toy and a happier experience for all.