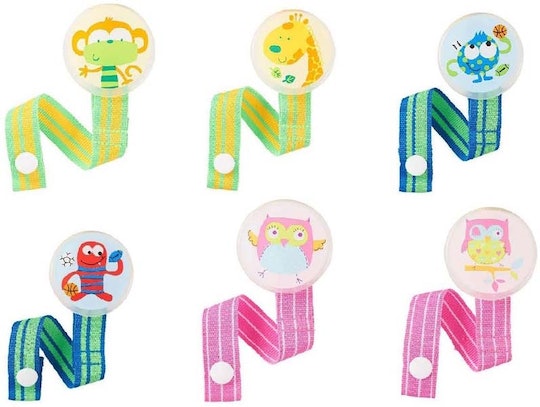 What To Do With Your Recalled Toys "R" Us Pacifier Clips

The Toys "R" Us pacifier clips have a spring mechanism that is known to break, AL.com reported, and the small parts can be a choking hazard. The Consumer Product Safety Commission has documented two incidences of the pacifier clips breaking, according to ABC27. So far, there are no reports of anyone being injured by the product. Toys "R" Us did not immediately respond to a request for comment.

Any pacifier clip owners who want to follow up with the company can reach Toys "R" Us at 800-869-7787; Representatives are available to speak with customers on weekdays from 9 a.m. to 5 p.m. ET, according to the recall statement.

The recall applies to about 53,000 units sold between February 2015 and April 2016, Toys "R" Us reported. Each retailed for approximately $4, were manufactured in China, and were imported and distributed by Toys "R" Us Inc., of Wayne, New Jersey. The pacifier clips came in six colors and featured six different characters, according to Toys "R" Us: "A red monster, blue monster, monkey, giraffe, owl with one eye closed, and an owl with both eyes open."

Toys "R" Us indicated in the recall statement that all recalled clips include the model number 5F6237F and are engraved with "2014 Geoffrey, LLC." Each has "a circular plastic cover affixed to a metal spring clip and a fabric strip with snaps at the other end."

Though Toys "R" Us is mostly associated with toys, the company has always sold baby products; according to its website, it started as Children's Bargain Town in 1948, focusing on the baby furniture business. Children's Bargain Town didn't sell toys until 1950, and the first Toys "R" Us location opened seven years later. The first Babies "R" Us store appeared in 1996. Now, customers can pick up some baby products at Toys "R" Us locations and find a selection of toys at Babies "R" Us.

Though the pacifier clips are definitely a major concern, the good news is that they reportedly haven't caused any injuries to kids so far. Any adults who have the pacifier clips at home may want to ensure they're out of reach for small children until the product can be returned to the store.