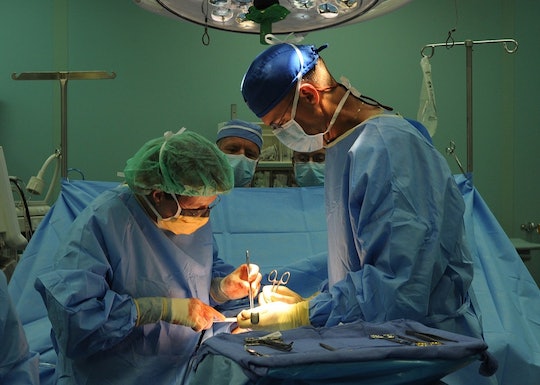 What To Expect During A Second C-Section

Having given birth by C-section two times, I can tell you that each experience was very different from the other. This was mainly due to the fact that my first cesarean delivery was an emergency, and happened so fast, it seems like a blur. However, since I would have my delivery scheduled for baby number two, I had a few questions about what to except during a second C-section. Thankfully, my doctor walked me through exactly what would happen so I felt comfortable knowing each step when it came time for it all to go down.

The most common reasons for a cesarean delivery are issues with the placenta, baby in breech position, fetal distress, or no progress during delivery, according to the website for the American Pregnancy Association (APA). But one of the most likely reasons for a second C-section is having previous delivered that way. If you're like me, your doctor will discuss this with you once you become pregnant after giving birth by the C. There are some women who are candidates for a VBAC, or vaginal birth after cesarean, but if you don't meet the criteria, it's looks like a another C-section will be in your future.

Thinking about having another surgery in order to deliver my baby brought up some concerns. Was this safe for both me and my baby? Even though every procedure has some potential risks, according to Mayo Clinic, "studies show that the risks increase after a third cesarean delivery, and vaginal deliveries aren't recommended after three cesareans." With that being said, your doctor may take some extra care to avoid some risks that repeat C-sections pose, such as bladder and bowel injuries, heavy bleeding, and excessive scar tissue. These are all concerns you can discuss with your doctor before the surgery begins.

Other than having a date on the calendar for the delivery, your second C-section will be pretty similar to your first. The doctor is going to follow the same steps of pre-op for a C-section as she did when you delivered your first child. After being admitted to the hospital, you'll be prepped for the operating room, and given a little time to relax (as much as you can when in this situation) before being taken back for surgery.

There were a few differences for me with the second C-section; I was able to feel more in control and be more aware of what was happening. Talking with my doctor and knowing what to expect really prepared me to stay confident in the C-section process. The second time around was much more enjoyable which helped to keep me in the present moment.