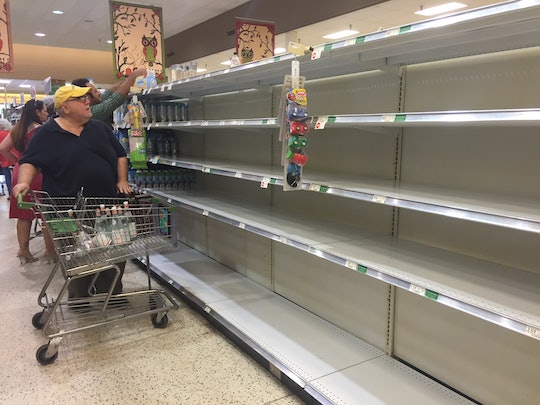 What To Take For Your Kids During An Evacuation

This weekend, the southeast coast of the United States is expecting a pretty nasty storm — Hurricane Matthew. Despite it no longer being the summer, it is still hurricane season — which means lots of rain and high speed winds are expected to wreak havoc along the East Coast. For those who will seek refuge from the storm this weekend and leave their homes, there are handy lists instructing you on what to take for your kids during an evacuation — because hurricane evacuations can be really scary.

According to CNN, Hurricane Matthew is expected to reach Florida, Georgia, South Carolina, and North Carolina anywhere between Thursday evening and Saturday morning. But these states are not just expecting any old rain storm — the hurricane is a Category 4 — and the biggest hurricanes (like Hurricane Katrina in 2005) are classified as Category 5 storms. The threat of this storm is so scary that Florida Gov. Rick Scott has already called on residents to evacuate from the storm and seek shelter, according to CNN.

South Carolina Gov. Nikki Haley has also ordered for the evacuation of coastal counties in her state. "Having a plan in place could mean life or death," Scott said in an address to residents on Wednesday. If you are in one of these soon-to-be affected areas and plan on evacuating with your children to higher and drier land, but can't seem to make the right packing list for them — don't stress it. Besides necessities — like your cell phone, clothing for the family, money and plenty of gasoline for the family van — there are a few helpful items to bring for kids.

While insurance may be able to recover superficial things in a home, the most important things to take for yourself and your children are government documents — things that can't suffer from the water damage of the storm and will help your family in case of an emergency. The National Hurricane Survival Initiative defines these documents as birth certificates, social security cards, passports, and insurance policies. If these documents are damaged, it is not the easiest process to recover them. Bring them along, and keep them safe just in case you need to use them.

Things like granola bars, dry cereal, and foods that will keep your child full and nourished are necessary during an evacuation. The car rides down evacuation routes can be very long. Your kids will thank you for keeping them fed (and occupied by eating) during the hours spent in traffic on the highway. The Red Cross recommends bringing at least a three-day supply of non-perishable food and a three-day supply of drinking water for families who are evacuating.

The car ride to your evacuation site will more than likely take a little bit of time, and your kids will more than likely need to be occupied once you arrive. An iPad, iPod, or even a Kindle loaded with books, music, and educational movies (and maybe some fun ones, too) will serve as an endless source of entertainment for your child during the evacuation process. According to The Times-Picayune, something like a portable DVD player is one of the most important things to bring for a child during a hurricane evacuation. Even packing a coloring book, bag of small toys, or a sketchpad helps — basically, if it will occupy your child and doesn't take up too much room in the car, bring it along.

Inhalers, children's Tylenol, allergy medicine — bring anything you might need for your child in an emergency. It is important to be prepared for any and all emergencies that may occur on the road or away from home — even if the emergency is as small as your child scraping their knee.

Something Comforting From Home

Hurricane evacuations can be scary for parents leaving their home and not knowing what will happen. For kids, this is just as terrifying. Allowing them to bring their favorite toy, blanket, pillow, or stuffed animal can serve as a reminder that everything will be ok when they get home.

In 1999, when I was in elementary school, my small coastal town in Georgia was evacuated due to a hurricane. My mother took me and my sister a few hours west to Atlanta, Georgia where we met my father and waited out the storm. It was a little scary — to be so young and unsure of the situation — but we had everything we needed and made the most of it. Luckily, the storm passed, we were safe and were able to make it through with the items we had. And with a little luck and the aforementioned items in your evacuation kit, you and your kids will be able to make it through as well.